These Cafe Steamers from Healthy Choice have not fared well here at Dr. Gourmet. The first one we tried, way back in 2007, was a Cajun Style Chicken & Shrimp that was truly awful. So bad, in fact, that we didn't try that line again until last year, when we tested their Lemon Garlic Chicken and Shrimp and Grilled Vegetables Mediterranean. Both were vast improvements over the Cajun Style Chicken & Shrimp, but despite the ingredients being properly cooked (as they weren't four years before), the meals suffered from unremarkable sauces - mostly bland or even metallic-tasting.

Hope springs eternal here at Dr. Gourmet, however, and today we have two more Cafe Steamers to test. These caught my eye because they bear the "Top Chef" logo from the cooking competition series on Bravo. I've enjoyed watching the show, so I was hoping that the chef contestants' creativity would be translated into these frozen meals. 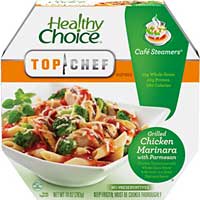 That is, that's what I hoped until I got the packages home and noted that they really say "Top Chef inspired." Still, I was encouraged by the look of the Grilled Chicken Marinara, although the sauce smelled rather sweet while it was cooking. Unfortunately, it also tasted sweet. Not overly sweet, but oddly enough that was the only flavor I could detect in the sauce: sweetened tomato sauce. No spices or even cheese, despite the label stating that it's "Grilled Chicken Marinara with Parmesan." It's too bad because the whole grain pasta was cooked just to al dente, as was the broccoli. The chicken pieces were not overcooked, either. As with the Lemon Garlic Chicken, this isn't bad. It's just not very good. 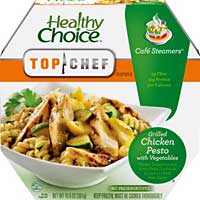 The Grilled Chicken Pesto with Vegetables fares about as well. The pasta in this meal, however, is not whole grain, which yields a mushy pasta that breaks up when you stir it into the sauce. The zucchini and yellow squash, what little of them there are, are nice and crispy, and the chicken pieces are once again properly cooked. Once again the meal is spoiled by a bland sauce. It has a sharp, green scent from the spinach and is redolent of olive oil, but there's not a basil flavor anywhere to be found in this sauce. I will admit that it's vaguely basil-scented, though it does have a slightly metallic aftertaste. "Inoffensive" is about the best word I can use to describe this meal.

Overall, two more thumbs down for Healthy Choice's Cafe Steamers. Despite the enormous amount of plastic involved, the steaming process seems to work well. They still need to work on flavor.