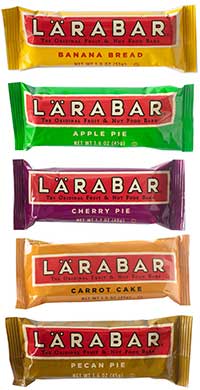 It's been some time since we reviewed energy bars.  Our past experience has been OK, but most of them are more highly processed and full of simple sugars.  While that may be in the form of honey or something that seems equally healthy, they are, by and large, sources of concentrated carbohydrates without much protein or fiber.

The names of the Larabars in the grocery aisle are intriguing: many of them are named for familiar baked goods, such as Apple Pie and Banana Bread.  While the names (and the gluten-free labeling) caught my eye, it was the simple ingredients that made me pick them up for reviewing.

For example, the Banana Bread contains almonds, dates, and bananas.

That's it.  Really. When was the last time you read such a short ingredient list on a package?

Taking it out of the wrapper, it looks sort of like fruit cake. The flavor is good, with an initial taste of just what you would expect: banana bread.  The texture is chewy and a little crumbly, and it's sweet, but not cloying.  There is, however, a slightly astringent aftertaste that we thought to be most likely from the dates (something confirmed by later testing of other bars).  There is a good protein content at 6 grams and plenty of fiber (5 grams), making this very filling.  With the protein content this would be a good post-workout bar.

There are more ingredients in the Apple Pie bar. Five to be exact: almonds, unsweetened apples, walnuts, raisins, and cinnamon.  This one tastes even more like the name, with a sweet apple flavor and a texture of apple bits.  The apple is not fully pureed and the nuts offer some crunch.  The flavor of the cinnamon really comes through and the aftertaste has the sweet flavor of cinnamon. Unlike the Banana Bread bar, there is no astringent flavor.

"That's definitely cherry," was the comment of one taster: the Cherry Pie bar has a great cherry pie flavor that again comes from the simple ingredient list of dates, walnuts and unsweetened cherries.  Along with the Apple Pie, this tied for first as the favorite.

While the Carrot Cake was not at all like carrot cake, it did taste more like a good spice muffin and placed high in the tasting.  There are more ingredients than the others, with almonds, walnuts, raisins, pineapple, unsweetened coconut, carrots, cinnamon, and coconut oil.  The coconut and cinnamon flavors come through, making this bar sweet and spicy, with a rich, creamy texture.

The Pecan Pie, however, doesn't taste at all like pecan pie. In fact, there's no real pecan flavor to speak of and no significant sweetness.  This tastes much more like an old-fashioned date bar.  Along with the Banana Bread bar, both are clear disappointments compared to the others.