Boxed Mac and Cheese is disgusting. I joke about this, but it's true. The electric orange color of Kraft Mac and Cheese isn't really radioactive, but it's just as scary as a rod of plutonium sitting on your kitchen counter. And while it's not as bad for you as having a rod of plutonium on your kitchen counter, it's pretty close.

It's no wonder that parents want to find something to replace such a disgusting product, and "healthy" companies are all too ready to create look-alikes, often at 2 or 3 times the price. We keep seeing variations and keep hoping for a product that is both good and good for you and not twice as expensive as making your own. Now on the shelf are Horizon (the dairy organic products collaborative)'s boxed mac and cheese and Annie's Homegrown Organic Vegan Elbows & Creamy Sauce. Both of these products that we tested use gluten free pastas.

The Horizon package was daunting because the Nutrition facts claims 540 milligrams of sodium per serving. That's a lot of salt when you consider that a serving is (according to the package) 1 1/4 cups. I suppose they think that it's not OK to poison customers with non-organic products, but it's OK to poison them with salt. We forged on because, well, because "we eat bad food so you don't have to."

The package calls for you to "gather Horizon® organic butter and milk" first. We didn't use their products, so perhaps that's why the result turned south? After boiling the tiny pasta shells, draining, and mixing with the two tablespoons of butter, 1/4 cup of milk, and the cheese packet, the result was every bit as bad as Kraft Mac and Cheese. The pasta was OK, but the sauce was not cheesy at all (except for a slight aftertaste of cheese). It is a "white cheddar cheese," so it might not have as much flavor as the radioactive orange stuff, but this just has no flavor worth mentioning (except we did in the interest of full disclosure).

Worst of all, this doesn't make the amount that it claims. The package says that it is "about 1 cup prepared" and there are "about 2.5 servings." That would mean 2 1/2 cups total by my addition, but when I measured the final product there was only 1 3/4 cups - almost 1/3 less than advertised. That's bad, but it either means we were shortchanged, or the amount of calories, sodium, and fat are about 1/3 or so more than the box states, which means over 700 milligrams of sodium in each serving. 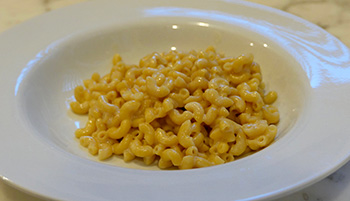 One cup (I measured) of Horizon's mac and cheese. Is this a realistic serving? 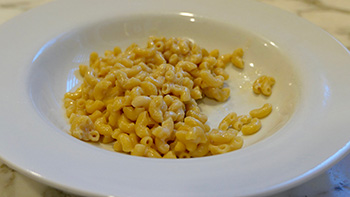 Based on the true yield of the box, this is the actual serving sized based on its stated "2.5 servings" per box.

Our review of the Annie's will be short. It calls for 1/2 cup non-dairy milk and an optional "2 TBSP buttery spread for richer flavor." Nothing can make this product good. It is in a word, disgusting. One tester (me) spit out the first mouthful and refused to eat any more. There is absolutely no cheese flavor in this. None. Another brave tester (after a second bite) said, "This is everything that gives vegan food a bad name." The sauce is made with pumpkin and sweet potato, which explains both the odd brownish-white color and the vaguely vanilla-like aftertaste.

The thing is that these are neither cheap or convenient when you look at the actual amount of food. We went to our local Winn-Dixie and did a price comparison of the cost of making these meals versus making the Dr. Gourmet Creamy Mac and Cheese.