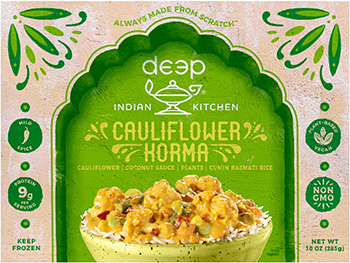 We seem to have been on something of a cauliflower kick here at Dr. Gourmet World Headquarters. Last week we reviewed pizzas and a pizza crust from Caulipower after making a Cauliflower Steak and putting Ranch Dressing on roasted cauliflower.

Today we have more Indian meals from Deep Indian Kitchen, who used to be known as Tandoor Chef. Late last year we reviewed the new company's Chicken Curry, Chicken Tikka Masala, and Chickpea Masala, with uniformly positive results. Would they continue their winning streak?

While Tandoor Chef had a Lamb Vindaloo, the Cauliflower Korma seems to be a completely new product, with an impressive amount of fiber at 8grams to go with its 330 calories and 520 milligrams of sodium.

Korma is a milder coconut-based yellow curry seasoned with cardamom, turmeric, and cumin, here served with a side of cumin-scented white basmatic rice. Did you know that you can buy brown basmati rice? Somebody tell Deep Indian Kitchen - while this dish certainly has plenty of fiber, using brown basmati would really amp up the fiber in less vegetable-heavy dishes like the Lamb Vindaloo.

The rice is perfectly cooked and lightly fragrant, all of which we've come to expect from Deep Indian Kitchen (nee Tandoor Chef). This has medium-sized cauliflower florets that are just a little overcooked, but to be fair, you'd expect that from a stew. The other vegetables are tender and the lima beans have enough bite to add some texture.

Really, if I got this from an Indian takeaway joint in London (which sometimes seems like the curry capital of the world), I'd be pretty happy. Granted, it's hard to screw up curry, but this is flavorful and pungent with great Indian spices. Deep Indian Kitchen could cut the sodium by 100 milligrams or so and nobody would notice. Be warned, however: despite the "mild" designation on the front of the package, this has a definite, lingering mouth burn that's only somewhat alleviated by mixing the rice into the korma. Nom, nom, nom. Good stuff. 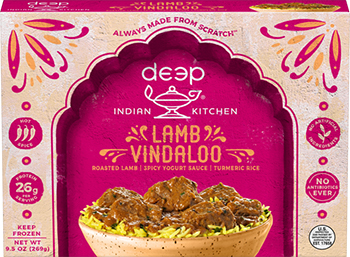 The Lamb Vindaloo has 350 calories, 610 milligrams of sodium, and only 2 grams of fiber, which would be at least doubled if Deep Indian Kitchen would switch to brown basmati. Here, the rice is bright yellow with turmeric, although it doesn't really taste of turmeric. It's just pretty.

There are half a dozen substantial (for a frozen meal) pieces of lamb that are just a shade dry, but larger pieces are less so. So often Vindaloo can be really greasy, but this isn't - just a rich tomato and coconut sauce with hints of mustard and the bite of green chili.

Oddly enough, although the Lamb Vindaloo is labeled "Hot Spice" - with three little peppers to boot - we found this to be much milder than the Cauliflower Korma. Perhaps their Scoville thermometer was off that day? (Scoville units are used to measure the heat of chilis.)

Both dishes we tasted today got a thumbs up, although both have more sodium than they really need. Of the two, unless I were really jonesing for some lamb, I'd choose the Cauliflower Korma over the Lamb Vindaloo.