Chicken and Rice Soup and Tomato Soup (both no salt added) 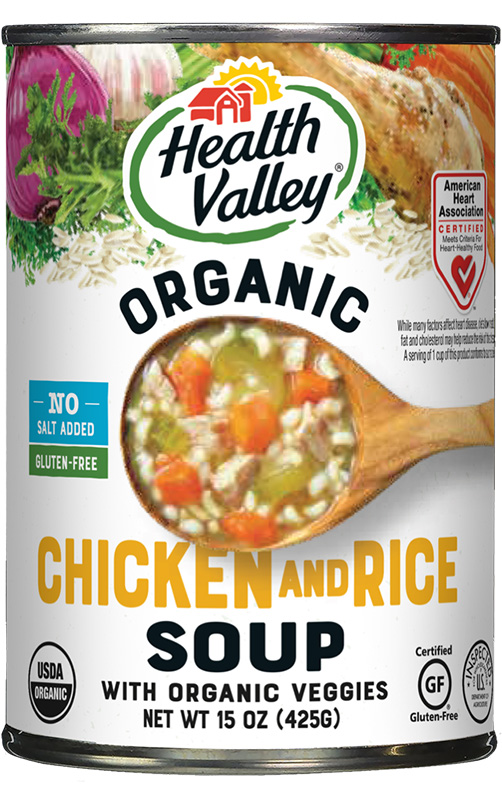 From time to time people will send us emails asking us to review this or that convenience meal or canned soup or asking why we haven't reviewed certain products that are widely available. The ones we hear about most frequently include the Devour Meals (owned by Heinz) as well as the new line of Lean Cuisine Bowls® which are billed as having 20% more calories than the "regular" Lean Cuisine meals.

What's wrong with these and other lines we've never reviewed? The sodium. According to the Devour Foods website, the meal with the least amount of sodium in their product line has 700mg of sodium, while the vast majority of their products are over 1000mg sodium per serving.

Health Valley's line of canned soups includes several that have no salt added, and for today's tasting we started with their Chicken and Rice soup, which happens to be gluten-free. Thanks to the new version of the Nutrition Facts box, this includes not only a per serving count for the package (which contains "about 2 servings per container") but also a more realistic listing for the entire can, which is what most people will consume. That means this bowl of soup (the whole can) contains 180 calories and only 150 milligrams of sodium - but only 1 gram of fiber.

We could nitpick. The (white) rice is terribly overcooked: if it had been brown rice it would have maintained some texture while also contributing more fiber to the dish. The carrots and celery are similarly overcooked - but to be honest, this is canned soup and I would be surprised if it weren't overcooked.

There's a fine chicken flavor to the tender pieces of chicken, however, and as you might expect, it tastes a little bland to those used to a little more salt in a dish. For those who must carefully control their sodium intake, we definitely recommend it. Adding just 1/8 tsp of sodium would bring this up to 440 milligrams of sodium for a slightly less than 2 cup serving, which is more than reasonable. 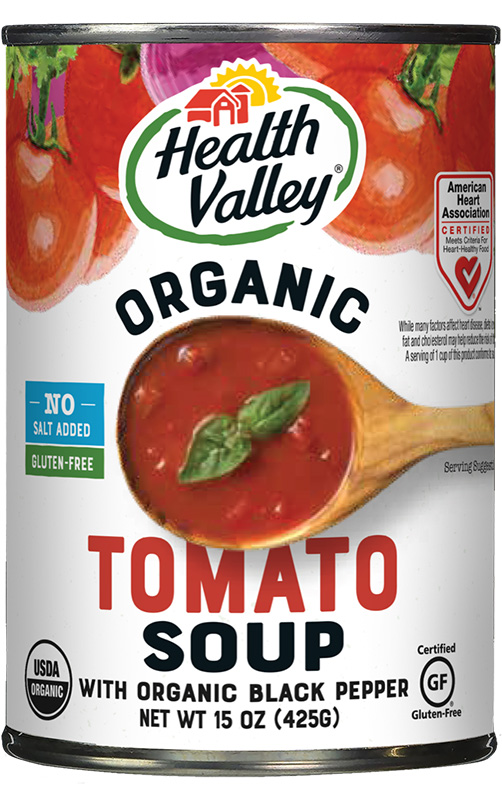 Next up was their Tomato Soup, which has 200 calories, only 40 milligrams of sodium, and 5 grams of fiber for the whole can.

On the plus side this has a sweet but tart tomato flavor in a soup with a fair amount of texture (chunks of tomato). It's almost like eating puree tomatoes.

But that sweetness is also the down side. While I can sympathize with wanting the label to read "no salt added," it's clear that in an effort to increase flavor the product developers took the easy way out: they added sugar. There's 15 grams of added sugar in this bowl of soup - that's almost 4 teaspoons of added sugar - never mind the sugar that's naturally present in tomatoes and the other ingredients.

This is far too much sugar and certainly nothing I would recommend to any of my patients, whether they were watching their sodium intake or not. What's disappointing is that if the product developers had simply cooked the product longer, the natural sugars would have broken down to have more of an umami flavor, obviating the need to add sugar. Too bad. In a few weeks we'll have two more varieties from their no salt added soups - in hopes that they aren't as sweet as their Tomato Soup.