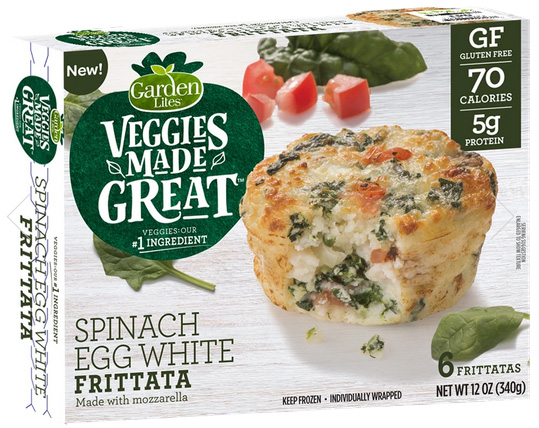 I really like having those Kale & Mushroom Egg Bites from Starbucks® for breakfast. I feel like they're healthier than having a breakfast sandwich and they really stay with me until lunch better than a muffin. Except they're $4.95 for two and 5 bucks a day for breakfast is crazy. I know I could make these at home from scratch, but I just don't have a lot of time in the morning. I've seen similar things in the freezer case. Are they any good?

This is a great question.

You're right that it's really easy to make a frittata, and a good option is to make one on the weekend, put it in the fridge, and reheat it in the microwave for a minute when you want one in the morning.

That said, you asked about the frozen options, so we went out and found some to review. Today's offerings are simply the first ones we found, but we'll keep an eye out for other brands.

These frittatas are from a company that brands itself Veggies Made Great, which appears to be a rebranding of Garden Lites, the folks who specialize in vegetable souffles and "bakes". They're sold in packs of 6 and we bought ours at our local Giant for $4.50.

But how do they taste? 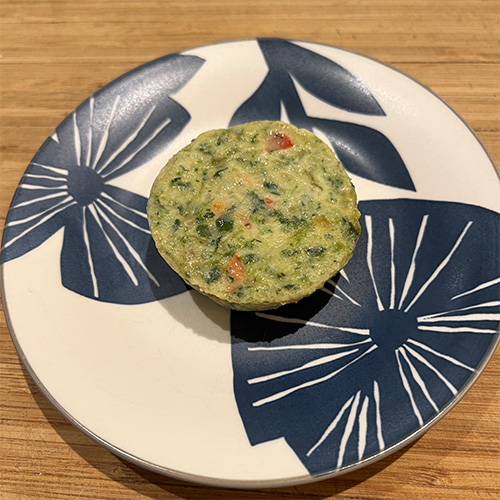 There are conventional oven instructions on the box, but as usual we opted for the microwave instructions. It's a good thing we're reviewing these for you today - we popped the individually-wrapped frittata in our microwave for the recommended 45 seconds and it was still nearly frozen in the center.

We tried again at 1 minute and the frittata was hot around the edges but still a little cool in the middle. But the flavor is pretty exceptional, with tons of spinach flavor up front and an umami undertone from the mozzarella. There's a hint of sweetness from the red bell pepper and the texture is that of a medium-heavy souffle.

Two of these would be a great substitute for Starbucks' Egg Bites - and they're lower in fat, as well: Starbucks' has 14g fat (9g saturated fat) while the Spinach Egg White Frittata, for two, has 8 grams of total fat (2g saturated fat).

Armed with our microwavery knowledge, we put the Sausage & Pepper Frittata in the microwave for a full 1:30 (90 seconds) and this had the frittata heated evenly through. 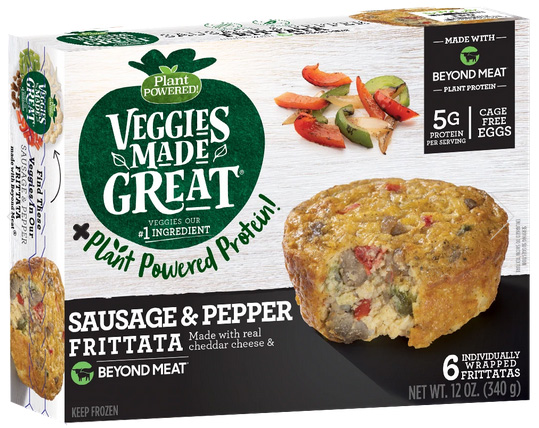 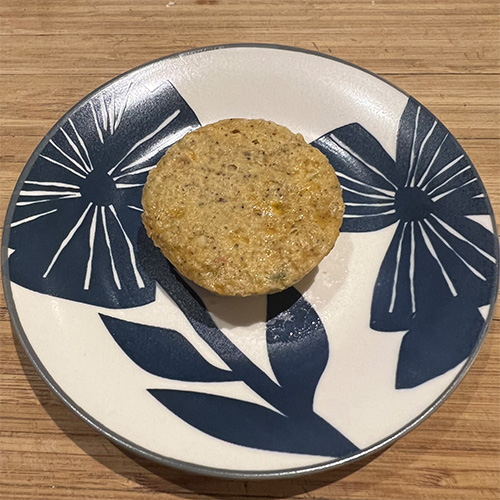 While the Spinach version is made just with egg whites, the sausage version uses whole eggs, giving the frittata a much denser texture. We couldn't really see the sausage bits in our frittata, which may explain why the sausage flavor is so mild. (It is a true sausagey flavor, however - there's no question about it.) The peppers that are touted on the package are also faint yet definite.

Compared to the Spinach version, this is a little less impressive, but it's still far superior, in terms of nutrition, to Starbucks' Bacon & Gruyere Egg Bites, with 20 grams of fat, 300 calories, 680mg sodium, and 0 (zero!) fiber.

As I mentioned, it's pretty easy to make your own frittatas. You can use our recipes and make them into your own "egg bites" by dividing the egg mixture into 6 cups in a standard-size muffin tin. Bake for the same amount of time as you would a standard frittata - and three of the resulting "muffins" is a serving.