Supreme and Spinach and Mushroom Pizzas 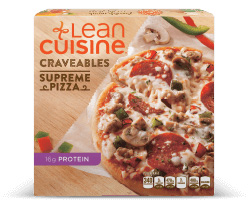 This week we have a new item to review and another to revisit: both caught my eye in the supermarket because of the "New Recipe" emblazoned on the front of the boxes.

We don't keep records of those varieties we choose not to review due to high sodium content. That said, I suspect that the Supreme Pizza might be one of those varieties, in which case the fact that it contains only 560 milligrams of sodium (380 calories, 4 grams of fiber) is good news. We hope there's good news with respect to the Deep Dish Spinach and Mushroom Pizza; it got a terrible review when we saw it last, and as one panelist remarked today, "bad pizza is just so depressing."

Both pizzas are cooked the same way: the box unfolds to create a little stand with a layer of silvery stuff on top that's meant to crisp the crust. About 3 minutes each and a minute of standing, then slice and dig in.

With higher numbers in all respects, we started with the Supreme Pizza. This is a thin-crust pizza that's "a little thin on the cheese," remarked a panelist as we put it in the microwave. There are, however, 3 pepperoni for a 5-inch pizza and a fair sprinkling of sausage to go with the green bell peppers and diced tomatoes we can see in the toppings.

The sauce on the Supreme Pizza has a bright tomato flavor without being too tart or too sweet, and an overtone of oregano. "Not a bad sauce at all," said the panel. The pepperoni and sausage taste like... pepperoni and pizza sausage. "I think they cut the sodium by cutting back on the cheese," said a panelist, "There's just not enough."

The crust also barely passes: when hot the crust is barely toasted on the bottom and a little chewy, with a faint yeasty flavor. Watch out when it cools, however, as it turns into a thick, dry, substance that breaks like a cracker. "Is it fair to give pizza a thumbs down based on how it tastes cold?" 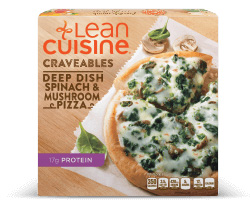 The crust on the Spinach Mushroom pizza (350 calories, 420mg sodium, 2g fiber)) is quite different. At first the panel was put off because the outside edges remain soft - almost spongy - rather than becoming crispy as any deep dish pizza might. The overall flavor and texture of the crust are pretty good, however, with a fairly yeasty flavor and dense, yet tender texture.

The toppings are a significant improvement over the previous version: the sauce has a light, creamy, buttery flavor and there's plenty of mozzarella cheese - enough for any cheese lover. The spinach and mushrooms are similarly portioned and the bitter spinach flavor comes through the mozzarella and cream sauce nicely, with a hit of umami from the mushrooms. A real winner for those who like spinach and mushrooms - there won't be enough left to find out how the crust is when it's cold.