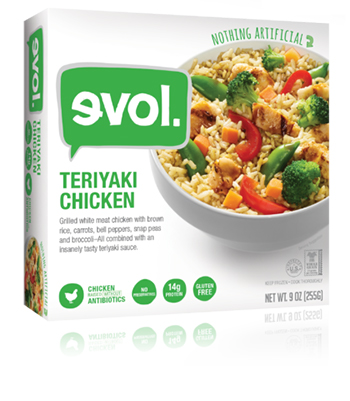 Despite their impressive beginnings, evol Foods has been having some serious challenges in the last few years, with what seem to me to be poor menu choices (macaroni and cheeses?) and a significant increase in the amount of sodium in the newer products. As a chef friend of mine used to say, "It's easy to hide your sins [as a chef] with fat and salt," and evol Foods is a great example: in many of their newer products they seem to be taking that adage to heart in the worst of ways.

My wife noticed the Chicken Tikka Masala on the shelf at our local Whole Foods Market and was intrigued by the idea of such a flavorful dish from evol, despite the fact that the dish has just about the maximum amount of sodium we like to see in a single-serving frozen meal: 680 milligrams of sodium for a 270 calorie dish.

Yes, that's a ton of sodium and we would love it if all frozen meals had at most a 1:1 ratio of calories to sodium. Alas, we recognize that people will consume these dishes because they are convenient, so we choose our recommendations to be on the low side of what is available.

As I like to say to my patients and staff, "The enemy of better is perfect." By that I mean that if I expected all of my patients to follow some "perfect" diet, the vast majority of them would never achieve it for more than the short term - and they would at some point revert to the poor eating habits that brought them to me in the first place. Instead, I work with my patients to make smaller changes in their diets - like choosing frozen meals with less than 700 milligrams of sodium per serving rather than meals with over 1,300 milligrams of sodium per serving - that will in the long run (with further changes as tolerated) lead to a healthier patient with a sustainable new lifestyle.

The tasting panel chose to revisit the Chicken Teriyaki first in this tasting. Note that this is not the 'Lean & Fit' version of the Teriyaki Chicken, which we revisited not long ago. The (not 'Lean & Fit) Teriyaki Chicken we reviewed back in 2011 had 250 calories, 490 milligrams of sodium, and 4 grams of fiber. Today's version has 260 calories, 600 milligrams of sodium, and the same 4 grams of fiber.

It also has the same short-grain brown rice as in the 2011 version that is cooked quite beautifully in the microwave, with a lovely, nutty flavor. While the vast majority of vegetables are diced carrots and snap peas (both contributing soft sweetness and a needed crunch), there are only a few lonely bits of broccoli crown and but one or two bits of green and red bell peppers.

Just 10 calories difference is pretty easily explained by, say, a small change in the amount of vegetables, but I am at a loss as to how evol added over 100 milligrams of sodium to this dish without making it taste salty. That said, the panel did note that although the teriyaki sauce wasn't overly sweet, as it so often can be, "it wasn't particularly present, either."

This is the difficulty with teriyaki sauce: too much is too sweet and cloying, while too little is not enough to impart its flavor. The good news is that this restrained approach to teriytaki sauce allows the flavors of the ingredients - from chicken to snap peas - to shine. But if you expect a mouth-filling teriyaki flavor, choose another product or make your own at home. 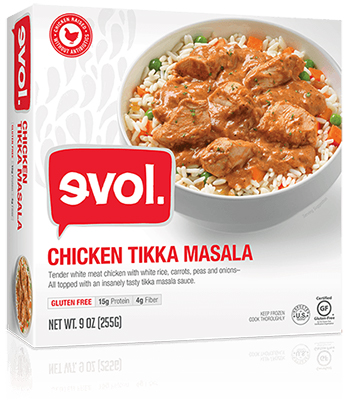 As I mentioned, my wife picked up the Chicken Tikka Masala (270 calories, 680 milligrams sodium, 3 grams fiber) at our local Whole Foods Market. I've been concerned with the increased level of sodium in newer products at evol, so I thought it was worth trying: perhaps evol was on to something and their product's flavor would justify the higher sodium levels.

Spoiler: it doesn't seem to.

First strike: the sauce is grainy. We spotted the telltale white dots of curdling in the sauce as the dish came out of the microwave. That isn't a deal-breaker, but it certainly isn't good news.

Second? White rice. Yes, the white rice is cooked al dente. It still doesn't have as much fiber as brown rice, and brown rice has far more flavor. That could (maybe) be overlooked.

Third: there are onions? We couldn't find any and the flavor certainly didn't give them away. Fourth? The stingy amount of sauce. There's perhaps a tablespoon of what might have been a good tikka masala sauce, with milk, tomato, jalapenos, ginger, and garlic, but there's so little of it that the flavor is merely an afterthought, rather than the central point of the dish.

Sure, the bits of white meat chicken are tender and savory enough, and the peas and diced carrots are appropriately cooked from frozen (as one panelist said,"Frozen peas and carrots are... frozen peas and carrots."). Yet that's not enough to give what should be, but isn't "a dish that grabs your tastebuds and shakes them" (the words of a panelist) a thumb's up. With that much sodium and that little flavor, we can't recommend it.