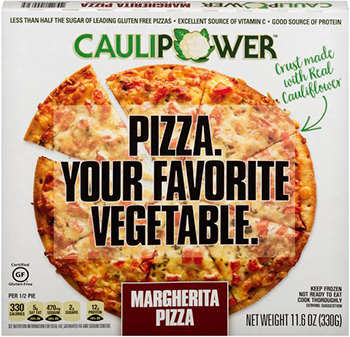 Here in the first week of January 2020 we have been all about cauliflower. Not planned but just coincidence. Ranch Dressing on Monday inspired by a great salad I had while traveling and again on Thursday with Cauliflower Steak (also inspired by my travel to London (in many ways now the food capital of the world).

Today I sadly have to get back to reviewing convenience food. Remember our motto here at DrGourmet.com: "We eat it so you don't have to." A disclaimer - none of the recipes or reviews this week have been very Coumadin friendly because cauliflower is pretty high in Vitamin K.

I was diagnosed with Celiac disease in 2011, and other than having my occasional fried chicken (I grew up in the South and would have it every now and then), pizza is the food I miss the most. In some ways pizza can be relatively healthy, in the going out world. Not the big chain delivery guys who are dispensing schlocky, highly processed food, but your local pizza parlor where they are making great quality fresh dough (often with whole grains), topped with terrific ingredients. Before I was diagnosed, my wife and I would go to a local pizza joint once a week or so, splitting a salad and a small personal sized pizza. Once I was diagnosed, we had to find another place for our weekly casual night. We ended up at a local Creole/Mexican place (but that's another story).

We recently moved Dr. Gourmet World Headquarters to Washington, DC, so we have a wealth of items to review that might not have been quite as accessible in New Orleans. I spotted these Caulipower© pizzas in the Whole Foods Market closest to my home in DC (wow! more than one in the city!) and again in a Safeway®, and to be honest, gave in to hope: what if I could find a decent gluten-free pizza?

In addition to the pre-made Margherita and Veggie pizzas, I also picked up a package of their plain pizza crusts. I like to put together my own pizzas and I'd love to find a good pizza crust. We have, however, been disappointed in the past.

For my review I started with the Margherita Pizza, which is impressive with 330 calories for 1/2 the pizza (470 mg sodium, 3 g fiber). Eating half the pizza is pretty reasonable, especially if (like me) you like to eat leftover pizza for breakfast.

Here's how the Margherita Pizza looks before cooking: 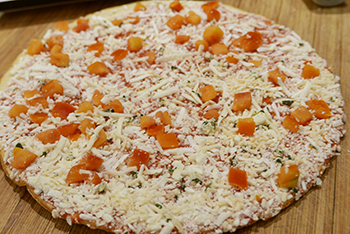 The directions say to cook the pizza from frozen, placed directly on the oven rack, at 425° F for 13 to 15 minutes in a conventional oven (shorter if you use a convection oven).

The pizza is described as having "Freshly diced vine-ripened tomatoes atop a generous helping of mozarella cheese, extra virgin olive oil, garlic, and spices...."

Whether the amount of cheese on this pizza is "generous" is a matter of personal taste. With respect to the toppings on this dish, all I could taste was the tomato sauce - which, to be fair, is bright and fresh-tasting. Garlic? Nope. Spices? Nope. I could hardly even taste the cheese.

The most important part, at least for those with Celiac, is the crust. How is it?

At first I thought this might be like the thin crust New Jersey pizza of my youth, with a thin, foldable crust. Unfortunately, this crust is so thin that it's more like having pizza sauce and toppings on a rather thick, damp cracker. It's floppy, but it has no yeasty or even bread-like flavor. 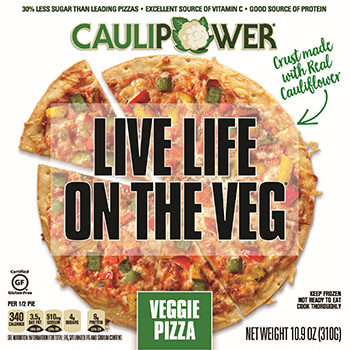 While the toppings on these pizzas might fall short of good food, perhaps the crust could make a decent pizza with the right toppings. Both pizzas have a fine, roasted cauliflower flavor to the plain bits of crust, that could be really good if you don't mind that the texture is that of a damp water cracker. 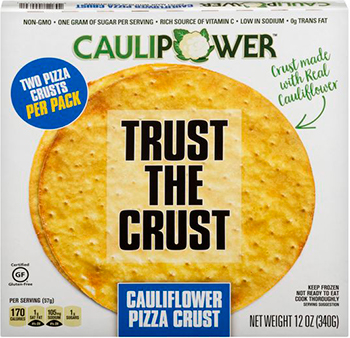 So I tested the plain crusts with my own fresh-made tomato sauce, adding mozzarella and Parmigiano-Reggiano cheese. 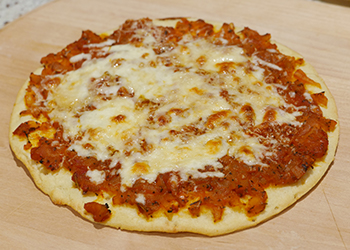 The plain crusts come two to a package, so I tested one crust by cooking according to the directions: placing the toppings directly on the frozen crust and cooking the recommended amount of time.

I thought the crust might be less floppy if I blind baked the crust first before adding toppings, so I placed one crust on a pre-heated pizza stone (an essential item if you are going to make pizza regularly) for 15 minutes, turning over every 2 minutes. Then I added the same toppings as the other crust and cooked until the crust was golden brown on the edges and the cheese melted.

Sure, the pre-topped pizzas might not be great in terms of toppings, but the more serious problem is that the crust simply won't do. These are basically pizza sauce and toppings on a thickish, gluten-free water cracker, with no flavor or texture whatsoever.