Gluten Sensitivity
This recipe is NOT safe for those who are sensitive to gluten.

"There is nothing like soup. It is by nature eccentric: no two are ever alike, unless of course you get your soup in a can." -Laurie Colwin

OK, so this isn't really French Onion soup, but I titled the recipe that way because of the croutons and Swiss cheese on top. The flavor of this is entirely different: where true French Onion Soup would be more savory, this version is creamy, sweet, and a bit herbaceous.

Servings: 2 | Serving size: about 1 1/2 cups soup with cheese and croutons

This recipe can easily be multiplied. This recipe does make very good leftovers, provided that the cheese and croutons are kept separate, added at the last minute, and the bowls placed under the broiler to melt the cheese. 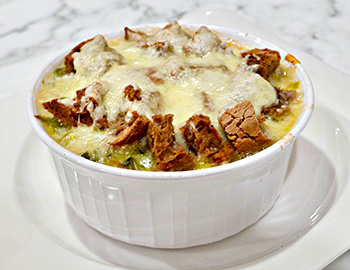 Place a large skillet in the oven and preheat to 375°F.

Place the whole grain bread in the oven directly on the rack.

Add the oil and shallots to the skillet, stir, and return to the oven.

Cook the shallots for about 5 to 7 minutes or until lightly browned. Stir occasionally.

Remove the (toasted) bread from the oven and set aside while the onions and leeks are cooking.

Add the green part of the leeks and cook for 5 minutes. Stir occasionally.

Add the white part of the leeks and cook for 10 minutes. Stir occasionally.

Return the skillet to the oven for about 3 minutes, then remove and stir until the goat cheese is melted and the soup is creamy.

Cut the bread into 1/2 inch squares and sprinkle over the soup.

Top with the grated Swiss cheese.

Return the bowls to the oven and bake for about 7 to 10 minutes or until the Swiss cheese is melted.

Serving size: about 1 1/2 cups soup with cheese and croutons