"A woman who can eat a real bruschetta is a woman you can love and who can love you. Someone who pushes the thing away because it's messy is never going to cackle at you toothlessly across the living room of your retirement cottage or drag you back from your sixth heart attack by sheer furious affection. Never happen. You need a woman who isn't afraid of a faceful of olive oil for that." - Nick Harkaway, The Gone-Away World

Quinoa is a great choice for side dishes and you should keep it in your pantry. It has tons of fiber and great texture with a slightly nutty flavor.

You can use it almost anywhere you would use rice. If you have a favorite rice recipe it works pretty much the same except your rice recipe is likely three to one liquid to rice and two to one works with quinoa. Bring the liquid to a boil and add the quinoa. Reduce the heat to a simmer. Unlike rice, you can stir it a bit and it won't get gummy and it'll keep your quinoa fluffy.

If you have a rice cooker, the same holds true. Use a two to one liquid to quinoa combination (two cups water to one cup quinoa). If you don't stir the quinoa you'll get a little browning at the bottom of the cook pan (depending on how your rice cooker works). I like this and will stir the quinoa just as the rice cooker is done because it offers a lovely caramelized flavor that enhances the nuttiness of the quinoa.

It's best to wait until just before serving to add the avocado or it will oxidize and turn brown.


Quinoa Salad with Tuna and Avocado

Cooking time: 30 minutes (does not include chilling time)

This recipe can easily be multiplied and makes good leftovers. 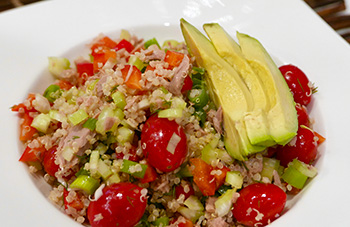 Place the water in a small sauce pan over high heat.

When the water boils, add the quinoa. Reduce the heat to a high simmer.

Partially cover the pan and cook until the water is almost evaporated. Stir occasionally. When the quinoa is done, turn off the heat and cover.

After about 5 minutes, remove the quinoa to a large mixing bowl, and after it has cooled place in the refrigerator to chill.

While the quinoa is cooking, place a large skillet in the oven and preheat to 325°F.

When the pan is hot, add 1 teaspoon of the olive oil to the pan, then add the leeks and the shrimp.

Roast for about 10 minutes, removing the shrimp when pink. Place the shrimp in the bowl with the quinoa and return to the refrigerator to chill.

Turn the leek over in the pan and finish roasting: about 20 minutes.

Slice the leek crosswise and add to the bowl with the quinoa and shrimp.

Fold together until well blended.

Chill well. The salad is best if it is chilled overnight before eating.