Gluten Sensitivity
This recipe is safe for those who are sensitive to gluten. Blue cheese is gluten-free, but check to make sure there is no modified food starch in the sour cream.

"Here's to the crazy ones. The misfits. The rebels. The troublemakers. The round pegs in the square holes. The ones who see things differently. They're not fond of rules. And they have no respect for the status quo. You can quote them, disagree with them, glorify or vilify them. About the only thing you can't do is ignore them. Because they change things. They push the human race forward. And while some may see them as the crazy ones, we see genius. Because the people who are crazy enough to think they can change the world, are the ones who do." -Rob Siltanen

I prefer to use Granny Smith apples for this because the tartness is a great balance for the creamy blue cheese dressing. It's best to wait to combine the apples and celery with the dressing as the apple will absorb liquid from the dressing and turn mushy (it will last about 24 hours in the refrigerator). Most of the restaurants where I've had this salad use celeriac (celery root), but I chose to use celery because celeriac isn't always widely available. If you're not a fan of cilantro, use fresh parsley instead.

This recipe can easily be multiplied. This recipe keeps well, refrigerated, for about 24 hours. After that the apple may turn brown and become a little mushy. That won't mean it's gone bad, but the texture won't be as crunchy. 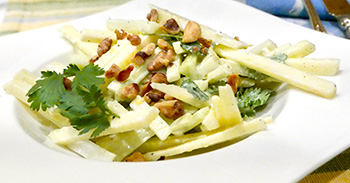 Place a small skillet over high heat. Add the walnuts and toast them, tossing frequently, for 7-10 minutes or until lightly browned. Watch the nuts carefully, and if the pan begins to smoke, remove from heat so the nuts don't burn. Remove the toasted walnuts to a paper towel and set aside.

Place place the olive oil, lemon juice, lemon zest, sour cream, honey, and blue cheese in a large bowl. Whisk until smooth (there may be small chunks of blue cheese.)

When ready to serve, add the celery, apple, and cilantro to the bowl with the dressing and toss gently to coat. Serve topped with the toasted walnuts.