Gluten Sensitivity
This recipe is safe for those who are sensitive to gluten. Use gluten-free bread in this dish. Check for anti-caking elements in pre-shredded cheese; it's best to grate your own from a block.

"How can people say they don't eat eggplant when God loves the color and the French love the name? I don't understand." -Jeff Smith

My wife suggested this recipe and I fell in love immediately. That's probably because I like eggplant so much, but there is something about the combinations of eggplant, onion, and cheese with the bread that sounded fantastic.

I had not heard of this recipe, and while I was researching it I found out there are a lot of variations. Some call for zucchini instead of or in addition to the eggplant, and many use breadcrumbs rather than chunks of bread. In creating my version of the the recipe I wanted a balance, and here the proportions are just right, with no single ingredient overwhelming or taking center stage.

Some recipes call for piercing the eggplant or cutting it before roasting, but I find that dries it out too much. Leave the eggplant whole when you roast it - don't even cut off the stems - and it will be much creamier because the liquid in the eggplant won't steam away.

This recipe can easily be multiplied using multiple pans. 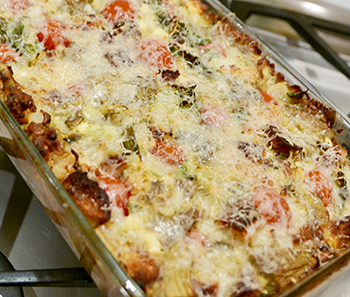 Place the eggplants, left whole (with stem) in the oven directly on the rack or on a piece of aluminum foil and roast for 40 minutes.

Remove and let cool. When cool enough to touch, peel the eggplant and discard the peel and stem. Cut the flesh of the eggplant into 1/2 inch cubes.

While the eggplant is cooling, place 2 teaspoons of olive oil in a large skillet over medium high heat.

Add the garlic and cook for about 2 minutes. Stir frequently, adjusting the heat so the garlic does not brown.

Add the onion and reduce the heat to medium. Cook for about 8 minutes. Stir occasionally.

While the onions are cooking, place the eggs in a large mixing bowl and whisk until smooth.

Add the gruyere and feta cheese to the eggs. Fold together gently.

Add the diced eggplant and onions. Fold together gently.

Add the bread and basil. Fold together gently.

Use 1 teaspoon olive oil to grease a 10 inch oblong pyrex or other casserole dish.

Place the eggplant mixture into the casserole and pat down gently.

Leaving them whole, press the tomatoes gently into the casserole, evenly distributed in a crisscross pattern.

Remove and sprinkle the grated parmesan evenly over the top of the casserole.

Return to the oven and bake for another 5 minutes.