Gluten Sensitivity
This recipe is safe for those who are sensitive to gluten. Use gluten-free pasta in this dish. Check for modified food starch in pre-shredded cheese; it's best to grate your own from a block.

"When you cut that eggplant up and you roast it in the oven and you make the tomato sauce and you put it on top, your soul is in that food, and there's something about that that can never be made by a company that has three million employees." -Mario Batali

At first glance this recipe might seem a bit odd. Roasted eggplant is terrifically delicious, but you might think that there won't be enough sauce to complete the pasta dish. Most recipes call for canned tomatoes and the instructions create an essentially basic tomato sauce with the addition of the eggplant and cheese. Some roast the eggplant and others don't (with the latter it is likely the eggplant will just end up too mushy).

Roasting the eggplant along with the onions and the fresh tomatoes is a natural fit. The smaller grape or cherry tomatoes are full of tomatoey flavor - almost but not quite like a fresh, homegrown summer season tomato.

Because the tomatoes give off a bit of liquid as they roast, they end up making a perfect sauce, but adding just a bit of the pasta water helps blend all of the flavors together into a light tomato and onion sauce. Along with the onions, eggplant, basil, and cheese you end up with a fantastic dish.

Lastly, the choice of cheese is always important. Ricotta salata is the traditional choice for this dish but might be harder to find. Try pecorino Romano or Parmigiano Reggiano as a substitute. The former is probably a bit closer to the ricotta salata in flavor and saltiness.

This recipe can easily be multiplied. Leftovers will keep well, refrigerated, for about 48 hours. 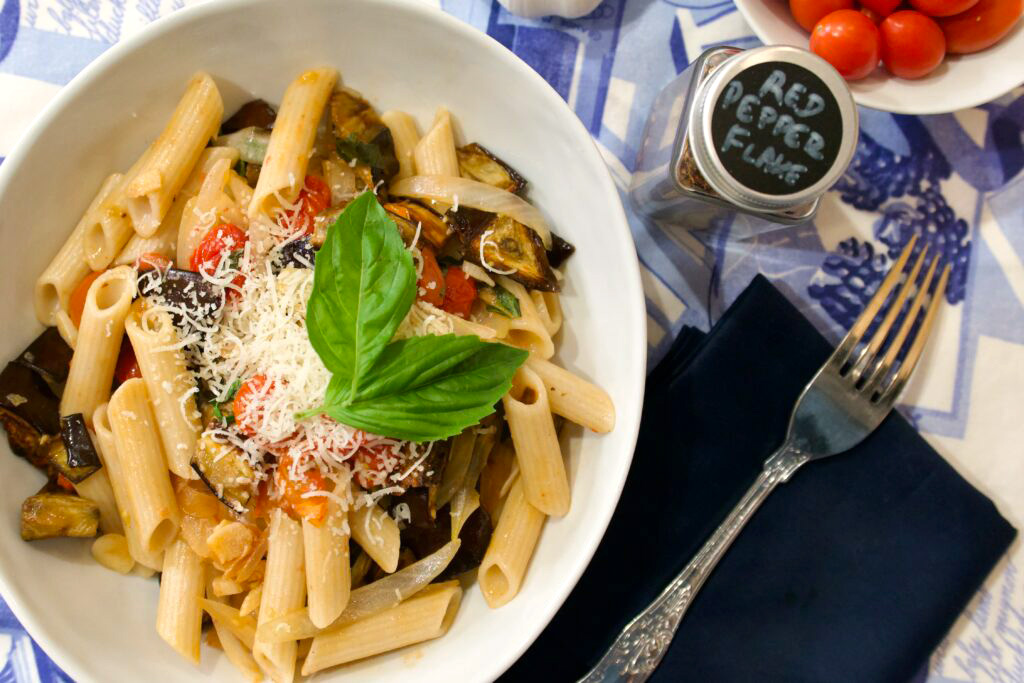 Place 4 teaspoons of olive oil on a large cookie sheet and add the diced eggplant.

Place the tray in the oven and roast the eggplant for 20 minutes. Toss the eggplant every 7 to 10 minutes to cook on all sides.

Place a large skillet on the second shelf of the oven.

After the eggplant has been roasting for about 15 minutes place the remaining 2 teaspoons of olive oil in the skillet and add the garlic and sliced onions.

Toss well and return the pan to the oven. Toss occasionally.

Place the water in a large saucepan over high heat.

When the water boils add the pasta. Cook for about 15 minutes until the pasta is al dente.

After the eggplant has cooked for a total of 25 minutes remove from the oven.

Add the tomatoes, red pepper flakes, salt and pepper to the onions and garlic and toss well.

Set the oven to broil and cook the tomatoes and onions for another 3 to 5 minutes.

Remove 1/2 cup of the pasta water and set aside.

While the tomatoes are cooking drain the pasta.

Remove the skillet from the oven add the eggplant, pasta, and basil.

Add 2 to 4 tablespoons of the pasta water and fold together gently, then serve topped with cheese.