"I'm going to break one of the rules of the trade here. Im going to tell you some of the secrets of improvisation. Just remember it's always a good idea to follow the directions exactly the first time you try a recipe. But from then on, you're on your own."
-James Beard

The key to this dish is a very hot pan. The marinated shrimp will come out of the refrigerator cold, and when they are added to the pan they will cool the skillet and the oil. That's an advantage, because it gives you time to get the shrimp spread out in the pan so that they cook evenly. After about 6 minutes the pan will have reheated to the point where the shrimp are about half way cooked and they are slightly crisp on the first side. As they are turned over, the pan heats more and the second side cooks faster. Ten minutes total is just long enough to cook the shrimp through and wilt the onions.

This recipe makes great leftovers - try the leftover shrimp on sandwiches! Note that active cooking time does not include marinating time. Mix the shrimp in the marinade the night before or at least the morning that you plan to make this. 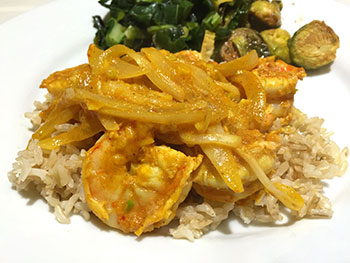 Add the shrimp and onions to the spice and yogurt mixture and toss until well coated.

Let the shrimp, onions, spices and yogurt mixture marinate for at least 8 hours in the refrigerator.

When ready to cook, place a large skillet over high heat.

When the oil is hot, add the shrimp, onions, spices, and yogurt mixture to the pan.

Spread out the shrimp so that each shrimp is lying on its side in the pan and each is touching the bottom of the pan.

Cook for about 6 minutes. Shake the pan slightly every couple minutes to keep the sauce well blended and to ensure it heats through.

Turn the shrimp over and cook on the other side for about 4 minutes. Shake the pan every couple of minutes to ensure the sauce (yogurt, onions, and spices) heats through.