Gluten Sensitivity
This recipe is safe for those who are sensitive to gluten. Use gluten-free pasta in this dish.

“Our movements through time and space seem somehow trivial compared to a heap of boiled meat in broth, the smell of saffron, garlic, fishbones and Pernod.” - Anthony Bourdain

I have reported on Spanish paella a few times. Paella is named for the pan it is cooked in, and there are a wide variety of paella recipes, including versions with seafood (the most popular). Most people think of paellas as only being bright yellow because of the saffron, but paella originated in Valencia and that version is flavored with paprika as well as saffron.

Often overlooked is a similar dish, Fideua, in this case named for the noodles. Short vermicelli about 3/4 of an inch long, the dish is cooked essentially the same way as paella with veggies, broth, saffron, paprika and then either some meat or seafood.

It is a great way to make a simple weeknight meal. Because it is made in a single pan, there is little cleanup and the hardest part is dicing the onions (or maybe mincing the garlic). This recipe only calls for shrimp because that is likely readily available but any seafood will work great  whitefish like cod, mussels or even squid. You can, of course, use a combination of any of these

If you can't find fideua (you can purchase it online pretty easily), use thin vermicelli or spaghetti noodles and cut them about 3/4 to 1 inch long.

This recipe can easily be multiplied but you will need a larger pan. Leftovers are fair - reheat gently to avoid overcooking the shrimp. 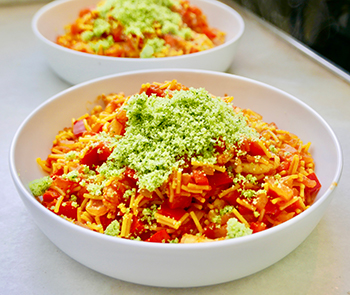 Place the boiling water in a small bowl or cup and add the saffron. Set aside to steep.

Place the tomatoes in a blender or mini-chopper and pulse gently until the tomatoes are about the consistency of canned diced tomatoes.

Place the parsley and almonds in a mini-chopper and process until the consistency of sand. Set aside.

Place the oil in a large skillet or paella pan over medium-high heat.

Add the garlic when the oil shimmers in the pan and cook for 1 minute, stirring frequently.

Add the onions and cook for about 2 minutes, stirring frequently.

Add the bell pepper and cook for about 2 minutes, stirring frequently.

Stir and adjust the heat so the mixture is simmering.

Simmer for about 20 minutes until the noodles are almost soft.

Add the shrimp and cook for another 5 minutes until pink.

Serve topped with the almond and parsley mixture (called "picada") (2 Tablespoons each).