Gluten Sensitivity
This recipe is safe for those who are sensitive to gluten. Use gluten-free bread in this dish. Lea & Perrins Worcestershire sauce is gluten-free.

"The kitchen really is the castle itself." -Mario Batali

Chayote squash is known as mirliton here in New Orleans. You can use it for almost anything - savory dishes, tacos, even desserts. I like this casserole because the spiciness is tempered by the mild mirliton and sweet shrimp. The bread crumb topping has a nice creamy texture and a bit of spice.

Substitute crab for the shrimp and you have a completely different dish with more robust seafood flavors.

This recipe can be multiplied but you should use multiple pans. This recipe makes very good leftovers. The mirliton can be cooked ahead of time - even the day before - and refrigerated until needed. If they are chilled when you assemble the casserole, allow a little extra cooking time so that they come to temperature. 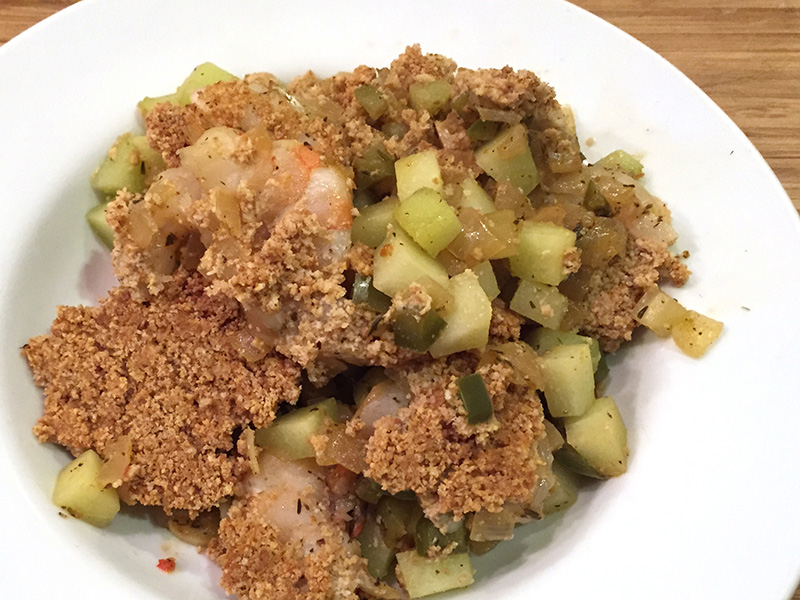 Place the bread in the oven to toast - about 10 minutes or until lightly browned and crunchy. Set aside to cool.

When the bread is cool, place in a blender or mini chopper and process into bread crumbs. Set aside.

Place the water in a large sauce pan and add the mirliton.

Bring the water to a boil and cook for about 30 minutes, until a knife slips into them with just a little resistance. Remove and set aside to cool.

When they are cool, peel, cut in half and seed.

Cut into 1/2 inch cubes and set aside.

While the mirliton are cooking, place the olive oil in a large skillet over medium high heat.

Add the garlic and cook for about 2 minutes. Stir frequently.

Add the onion and cook for about 3 minutes. Stir frequently.

Add the green bell pepper and celery and cook for about three minutes. Stir frequently.

Simmer for about 20 minutes, stirring frequently. Don't let all of the water evaporate. Adjust the heat so that there is a little bit of liquid in the bottom of the pan.

Remove from the heat and add the shrimp. Toss well.

When the sauce and the mirliton are done, place the diced mirliton in the bottom of an oven proof dish.

Top with the onion, green pepper, and shrimp mixture.

In a separate bowl, whisk the egg together with the Tabasco sauce.

Add the bread crumbs and toss until coated.

Pat the bread crumbs on top of the casserole and place in the oven.

Bake for about 15-20 minutes until the bread crumbs are toasted and the shrimp are cooked through.