Gluten Sensitivity
This recipe is safe for those who are sensitive to gluten. Use gluten-free pasta in this dish and freshly grate your cheese from a block.

I love linguine with clam sauce and this red clam sauce is really great. It takes only a few minutes to prepare and the flavor is fantastic.

Purchase littleneck clams for this recipe if you can. Their small size means you don't have to cut them up into pieces and I believe that the dish is better with the clams whole rather than using larger clams that you have to chop up.

The key to the sauce is the clam broth. Straining is the most important step. I do scrub the clams before putting them into the pan to steam but when the clams open they will give up a fair amount of grit and if you don't strain the broth, you will certainly know it. I like to start with Shrimp Stock rather than the water for steaming the clams. The clam broth is rich on its own but with the Shrimp Stock the flavor ramps up even more.

The second important tip is rinsing the clams to stop them from cooking further. This keeps them tender – it is really easy to overcook clams and turn them into the texture of a pencil eraser. Adding them back into sauce just long enough to reheat and they will be tender and delicious.

The best part is that there is a great salty flavor without any added salt. The taste is salty but in a different way – the saltiness of being at the beach and fresh seafood.

This recipe can easily be multiplied but does not make very good leftovers. 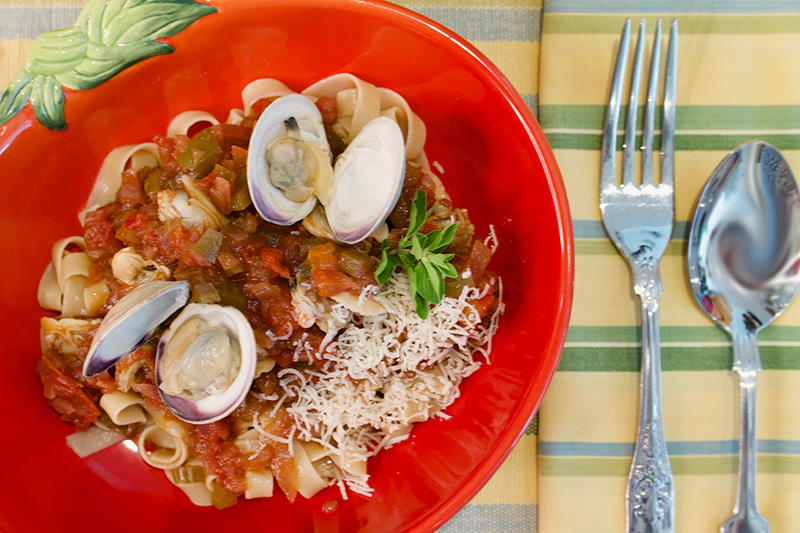 Place 1 cup water in a large skillet over high heat. When simmering add the clams and cover.

Cook until all the clams open – about 4 minutes.

Remove the clams and then shuck the clams from the shells into a mesh sieve. Run cool water over the clams for about 10 seconds and set aside.

Strain the broth through a fine mesh sieve.

Rinse out the skillet and place over medium high heat.

Add the olive oil and then the onion. Cook for about 3 minutes. Stir frequently.

Add the celery and peppers. Cook for about 3 minutes. Stir frequently.

Add the wine, tomatoes and the strained clam broth to the pan.

Season with the pepper simmer over medium heat until the liquid is reduced by about 2/3 (about 20 to 30 minutes).

When the sauce is ready add the remaining water in a medium stock pot over high heat.

When the water boils add the linguine. Stir occasionally.

Add the clams and the oregano to the red sauce and toss gently to heat through.

When the linguine is cone, drain and add to the pan with the sauce.

Toss gently and serve topped with the parmesan cheese.