Gluten Sensitivity
This recipe is safe for those who are sensitive to gluten. Make sure the sausage, sauerkraut, and horseradish are gluten-free and use gluten-free beer in this dish.

"I am more modest now, but I still think that one of the pleasantest of all emotions is to know that I, I with my brain and my hands, have nourished my beloved few, that I have concocted a stew or a story, a rarity or a plain dish, to sustain them truly against the hungers of the world." -M.F.K. Fisher

I first had this stew at one of my favorite restaurants in London. It's an odd little hole in the wall that I first ate in over 20 years ago. You would think by the name, L'Autre, that it would be French (l'autre is French for "the other"). But it's not: L'Autre is a Polish-Mexican restaurant.

The owner told me 20 years ago that he was Polish and opened the restaurant with his wife who was from Mexico. They began the place serving a menu with Polish dishes, but the Mexican embassy is around the corner, and when the workers there found out his wife was from Mexico, they began asking her to cook her native dishes for them. So the menu has this Polish Hunters Stew (bigos) made with goat alongside chicken enchiladas and nachos. Quirky, but it works, and the place is packed all the time. It is just good, honest peasant food with not a lot of frills, served simply by a cheerful staff.

When I was there recently I had a version of this stew and it was fantastic, so here it is for you. You can make this with goat if you want, but the pork shoulder, trimmed of excess fat, is probably more easily available to you. Don't worry that there is not a lot of liquid - it's supposed to be very thick. You can make this stew meat free by using a second onion and a second pound of mushrooms.

The other thing about L'Autre that I learned when I was there eating bigos recently is that the story about the owner's wife is a fib. The Mexican dishes were added to the menu when he hired a chef from the embassy. I do love the original story, but it has been made even better by finding out it is just that: a story.

This recipe can easily be multiplied, but you'll need a BIG pot. This recipe keeps well for about 24 to 48 hours in the refrigerator and freezes well. 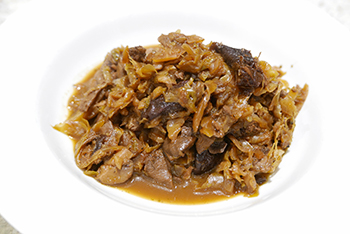 Place the mushrooms in a bowl and pour the boiling water over the top.

Stir and then let stand for about 10 minutes while you start the stew.

Place the olive oil in a large stock pot over high heat.

Add the onions and sausage and cook for about 4 minutes. Stir frequently.

Add the mushrooms and cook for about 4 minutes. Stir frequently.

Add the pork and cook for about 5 minutes. Stir frequently.

Reduce the heat and simmer for 90 minutes. Stir occasionally.

Add the prunes and horseradish. Stir and cook for another 30 to 45 minutes.