Gluten Sensitivity
This recipe is safe for those who are sensitive to gluten. Use gluten-free tamari sauce in this dish, and make sure the mustard and tortillas you use are gluten-free.

"Man is what he eats." -Ludwig Feuerbach

There are a lot of options on this recipe. You don't have to make the wasabi cole slaw if it's too spicy for you - use some plain thinly sliced bok choy or Chinese cabbage instead. Sprouts - either mung bean sprouts or alfalfa sprouts - are another option in place of the slaw. If yellow peppers aren't available, red, orange, or green peppers will work too.

This recipe can be divisible by 2.

Once cooked, the tuna keeps well for later assembly into tacos. Note that active cooking time does not include cooling or chilling time. 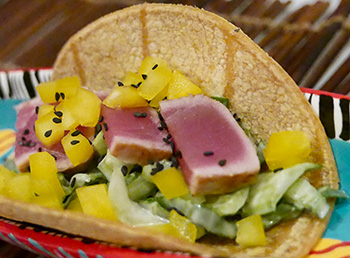 Place the mustard and soy sauce in a bowl and whisk until smooth.

Place the tuna steak in the bowl and turn gently to coat with the mustard sauce.

Place a large skillet over high heat and add the sesame oil.

When the oil is hot, reduce the heat to medium high and add the tuna steak. Coat the top of the tuna with some of the remaining mustard sauce.

Cook for about 4 minutes and turn the tuna over. Coat the top with some of the remaining mustard sauce.

Continue to turn every two minutes to sear each side of the tuna. After each turn, coat with any of the remaining mustard sauce.

Remove from the heat and let cool. Slice thinly.

When ready to assemble, place the cole slaw in the bottom of the tacos.

Top with the sliced tuna.

Top with the diced pepper and the sesame seeds and serve.