"Gleaming skin; a plump elongated shape: the eggplant is a vegetable you'd want to caress with your eyes and fingers, even if you didn't know its luscious flavor." -Roger Verge

This was inspired by a dish that I had at a great tapas restaurant in Spain. The food was innovative but clean and really healthy. The chef had taken the trouble to have a complete labelling for all allergens on his menu.

The eggplant tartare was something that I expected to come out similar to a baba ghanoush: more creamy than with texture. It was, however, like a tuna tartare, with 1/4 inch pieces of eggplant bound together in a very light creamy sauce. Looking at it carefully it appeared that the eggplant was truly raw, and I liked that, but I wanted a bit of softer texture. Likewise, the smoked paprika gives this recipe a great flavor.

I believe that the tartare needs to be served cold, but you could put almost any grilled item on top: either hot or cold.

Cooking time: 45 minutes (does not include chilling time)

This recipe can easily be multiplied. This recipe keeps well for about 24 hours in the refrigerator, and the fish can be served hot or cold. 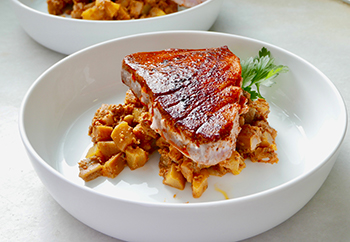 Place a large skillet in the oven and to 325°F.

Peel the eggplant and discard the skin.

Slice the eggplant lengthwise and scoop out the seeds and surrounding pulp.

Place 2 teaspoons of the olive oil in the skillet. Place the chopped eggplant seeds on one side of the pan and the diced shallot on the other side.

Return the pan to the oven and cook for about 15 to 20 minutes. Stir occasionally, keeping the eggplant and onions separated.

Place the roasted eggplant seeds in a blender or mini-chopper. Add the salt, pepper, and 1/2 teaspoon of the smoked paprika.

Process by pulsing the blender or mini-chopper until the mixture is a coarse paste.

Place in a bowl, then add the remaining 2 teaspoons olive oil and the roasted shallot.

Fold together and chill.

While the eggplant seeds and onions are roasting, place the water in a medium sauce pan over high heat.

When the water is at a simmer, add the diced eggplant and poach for 4 minutes.

Remove the eggplant to a paper towel and pat dry.

Place the eggplabt in a bowl with the lemon juice and toss well. Immediately place in the refrigerator to cool.

When the eggplant and onion mixture is chilled, fold together with the chilled diced eggplant.

Dust one side of the tuna steaks with the remaining 1/2 teaspoon smoked paprika.

When the oil is hot, place the tuna in the pan paprika side down.

Sear for about 3 minutes.

Grind the black pepper over the top of the tuna and turn.

When ready to serve, divide the eggplant tartare between two plates and top with the tuna steak.