"Fear is a strange soil. It grows obedience like corn, which grow in straight lines to make weeding easier. But sometimes it grows the potatoes of defiance, which flourish underground." Terry Pratchett, Small Gods

This is a quick and easy two-skillet dish, and when you roast chili peppers with oil, as in this recipe, they infuse the oil with the pepper's flavor. This in turn flavors the salmon.

Hatch peppers are milder than jalapenos - typically 1,000=8,000 Scoville heat units (SHU) while jalapenos are 2,500 to 8,000 SHU. Some Hatch peppers can be hotter, but the only way to know is to taste them (green onions are the same way). Poblano peppers (1,000-1,500 SHU) are a good choice on the milder side, and of course you could just use all green bell peppers for the least amount of added heat from the peppers.

This recipe can easily be multiplied (or divided by two) and makes good leftovers. 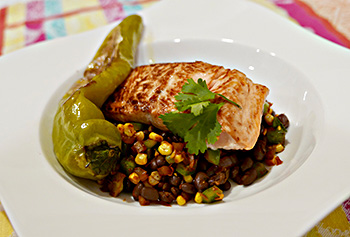 Place a large skillet in the oven and preheat it to 375F.

When the oven comes to temperature, add 2 teaspoons of oil and the Hatch peppers (leave whole).

After the peppers have been cooking for about 5 minutes, turn them over. They will cook for about 15 minutes total.

Add the corn to the pan and cook, tossing frequently, for about 5 minutes. Adjust the heat, if needed, so that the corn browns lightly but does not burn.

Add the onions, reduce the heat to medium, and cook for 3 minutes, stirring frequently.

Add the black beans and the water and stir until the water is evaporated and the pan is deglazed.

Remove the pan from the heat and add the cilantro, tossing to incorporate. Set aside.

Add 1 teaspoon of oil to the pan containing the peppers and add the salmon filets.