"It's amazing how meaty cauliflower can be." Alex Guarnaschelli

I was inspired to do this dish by a Spanish cooking show that I was watching. The word "tagine" refers to both a Moroccan recipe and the dish that it is cooked in.

The dish is a clay pot with a conical top that looks a little like a chimney. There is a hole in the top of the lid, and the dish both cooks as if in a skillet, but steam collects in the top of the tagine and helps cook the dish and keep it moist. Here's an example.

They used to be common wedding gifts, so you might already have one and don't know how to use it. It is actually pretty easy. Just cook the ingredients in the base on the stove as if it were a skillet, then reduce the heat and place the top on. Alternatively, this works great in the oven. My wife was certain that we had one but I assured her that was not the case (it may be the one piece of cooking equipment I don't have).

The item that attracted me to this recipe was not so much the dish itself (we have a lot of Moroccan inspired dishes on the website) but the grated cauliflower. The chef called it "cauliflower couscous" and I thought that was intriguing.

The grated cauliflower brings a great flavor to the dish, especially because it partly steams and partly roasts, giving it a meaty taste. The texture also adds a lot to the dish that the couscous would not.

This recipe can easily be multiplied and makes great leftovers. 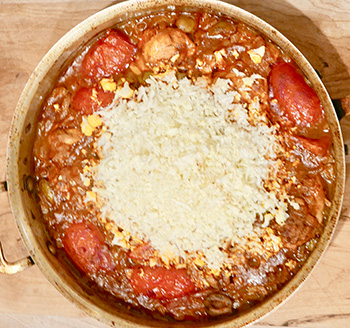 Add the onion and garlic and cook for 5 minutes. Stir frequently.

Cook for about 2 minutes. Stir frequently.

Add the chicken thighs and cook for about 5 minutes, until the chicken is lightly browned and well coated with the spices.

Stir, cover, and put in the oven.

Cook for 30 minutes and uncover.

Cook for another 15 minutes and then top with the grated cauliflower.

Cook for another 15 minutes and serve.