"The goatherds were the poorest people of Spain. Probably, they were the richest." -Jose Mujica, Politician

Paella is named for the pan it is cooked in, and there are a wide variety of paella recipes, including versions with seafood (the most popular). Most people think of paellas as only being bright yellow because of the saffron, but paella originated in Valencia and that version is flavored with paprika as well as saffron. Paella Valenciana generally includes game meat, such as rabbit and duck, but chicken and pork are often found in recipes. You can substitute any of those in any combination for the chicken and have a great dish.

Note that broad beans, or favas, are also traditional, but they're not widely available in the U.S.. Instead, you can use a large white bean, such as cannellini beans, as we did. Similarly, we substituted regular green beans for the large, flat green beans known as pole beans.

This recipe can be multiplied by 2, 3.

This recipe makes great leftovers. Take them for lunch and be the envy of all your friends. Note that this recipe can be multiplied, but you'll need a BIG pan. 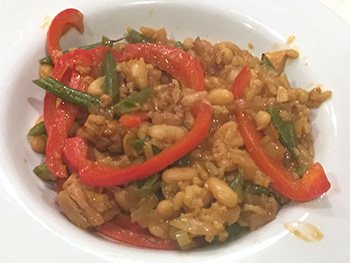 Add 2 teaspoons of olive oil to the skillet. When the oil is hot, add the red bell pepper and toss for 2 minutes, until barely softened. Remove to a plate and set aside.

Add 2 teaspoons of olive oil to the skillet and add the chicken thighs and cook, tossing frequently, 3-4 minutes, or until lightly browned. Remove the chicken to a plate and set aside.

Add the other 2 teaspoons olive oil to the pan and add the onions and the celery. Cook for 3-4 minutes, stirring frequently and scraping up any chicken stuck to the bottom of the pan.

Add the paprika and stir until the onions are well coated.

Return the chicken to the pan and add the Arborio rice, vegetable stock, water, salt, saffron, black pepper, and white beans. Stir and bring to a boil, then reduce heat to simmer.

Simmer for 10 minutes, then add the green beans and stir gently.