Gluten Sensitivity
This recipe is safe for those who are sensitive to gluten. Use garbanzo flour in this dish.

"There's almost nothing you can't do with a cashew. Not only does it lend its nutty sweetness to savory dishes, it also gives desserts a deep richness." -Kate Christensen

Spaghetti squash is so versatile. Most of us think of it as a replacement for pasta, and it can be, but it is more than that. The shape is similar, but the noodle-like squash is a bit denser than pasta and has some crunch to it. At the same time it is sweet where pasta isn't.

All of this adds up to an ingredient that you can use just like pasta, but it is a good idea to make some adjustments - especially for the sweetness.

When I was creating this recipe I knew that it would need something to offset the sweetness of the squash, and the tartness of the yogurt is the perfect balance for this dish.

This recipe can easily be multiplied and keeps well, refrigerated, 2-3 days. 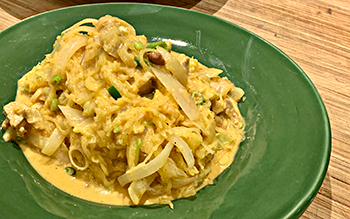 Bring the water to a boil and reduce to a simmer.

Simmer the squash for about 30 minutes and remove from the water. Set aside.

When the squash is cool enough to handle, cut off the stem and cut the squash lengthwise.

Scrape the seeds out of the center of the squash and discard, being careful to avoid removing much of the flesh.

Scrape the spaghetti squash into a bowl, separating the strands. Set aside.

Meanwhile, preheat the oven to 350°F.

Place the chicken thighs in a nonstick pan or skillet and place in the oven.

After 10 minutes, turn the chicken over.

Cook the chicken for 6-7 more minutes and remove from the oven. Place the chicken on a plate and allow to cool.

Place 1 teaspoon olive oil in a large skillet over medium heat. Add the white onion and cook, stirring frequently, for about 5 minutes or until slightly tender. Remove the onions from the pan and set aside.

Place 2 teaspoons olive oil in the skillet over medium heat.

Add the coconut milk, milk, salt, and the white part of the green onions, and cook, stirring continuously, until the sauce thickens - about 2 minutes.

Add the spaghetti squash, chicken, white onion, yogurt, and the green part of the green onions to the sauce and stir gently until heated through.