"Lentils are friendly - the Miss Congeniality of the bean world." -Laurie Colwin

Stuffed peppers are great for a lot of reasons. One is that it is essentially a one pot meal. Cook up the stuffing in a pan, stuff the peppers, rinse out the pan, put the stuffed peppers in the pan, and pop it in the oven.

This recipe calls for two large peppers that are each about a 12 or 13 ounces. If you can't find ones that large, use two medium peppers for each serving (four peppers total). 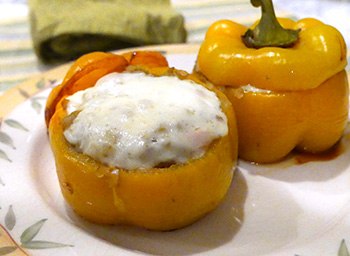 Slice the top off of the pepper, about 1/2 inch below the level of the stem.

Remove the seeds and the veins from the interior and the top of the pepper. Set the empty pepper aside.

When the pan is hot, add the onion and cook for 4 minutes.

Add the garlic and toss well. Cook for about 1 minute.

Add the celery and carrot and cook for two minutes. Toss frequently.

Cook for about 10 minutes until the water has evaporated.

Remove from the heat and set aside to cool for about 20 minutes.

After the vegetables have cooled slightly, fold in the chicken and then stuff the peppers with half of the mixture in each of the peppers.

Place the top on each pepper and then loosely wrap the pepper by placing a square of aluminum foil on top and folding down the sides.

Place the peppers in the oven and roast for 60 minutes.

Remove the foil and the top of the pepper.

Place the sliced provolone cheese on top of the chicken mixture inside each pepper.

Replace the top of the pepper and return to the oven. Roast for another 10 minutes, then serve.