Gluten Sensitivity
This recipe is safe for those who are sensitive to gluten. Make sure the sausage is gluten-free.

"The only thing I like more than talking about food is eating." -John Walters

You might have had the classic Coq au Vin. The French title for chicken in red wine seems so elegant and refined. It is, in fact, about as close as one can get to peasant food.

The recipe is delicious and was something of a staple of my young adulthood. We served it in my restaurant and I would cook it about once a month during medical school. I have often ignored its kissing cousin Coq au Riesling. Again, the French name seems so sophisticated - even more than the "au Vin" designation - but it, too, is simply chicken in white wine.

I was inspired to work on this recipe after reading one of my favorite restaurant reviewers wax lyrical about a version she had tasted. The traditional recipe is anything but - onions, shallots, leeks, maybe mushrooms, maybe not, tarragon, sage, parsley... It seems that as with most Country French food, anything goes. For this one I chose leeks for their mild oniony flavor and dried mushrooms to bring an intense umami flavor to the dish that offsets the sweet wine. The sausage brings a bit more depth of flavor than using the traditional diced bacon.

It is, as so many one pot meals are, super simple to make.

This recipe can easily be multiplied and keeps well for 3-4 days.

Serve with Brown Rice or Creamed Peas or Roasted Potatoes. 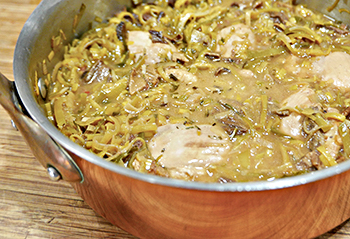 Place the mushrooms in a small bowl and add the boiling water.

Place the diced sausage in a medium sauce pan over medium high heat.

Cook until the sausage begins to crisp slightly and remove to a plate.

Add the leeks to the pan and cook for about 3 minutes until they are slightly wilted.

Add the chicken thighs, the sausage, tarragon, pepper, salt, and Riesling to the pot. Stir

Strain the mushroom tea into the pan.

Chop the mushrooms into 1/4 inch dice and add to the pot. Stir.

Cover the pan and place in the oven.

Remove from the oven.

Gently stir in the milk and serve.