"Savory...that's a swell word. And Basil and Betel. Capsicum. Curry. All great. But Relish, now, Relish with a capital R. No argument, that's the best." -Ray Bradbury

I first had this curry at a restaurant in London. It was, unlike a lot of curries, not a strong, spicy, in-your-face flavor. The spices were more subtle and I fell in love immediately.

The version I had was spicier than this one, and when I was researching and developing this version I found that most recipes do call for chilies. I decided not to include them as I wanted less heat and more spice. The result is really great: the sauce comes out quite subtle, but rich and flowery. Feel free to add some peppers - I think that it will equally great - but for me this works.

There was no consistency on when to add the cilantro. Some recipes add it early in the dish and others later. I chose later because I did not want that flavor to cook away, and the fresh green cilantro and mint really make this dish.

This recipe can easily be multiplied and makes great leftovers. 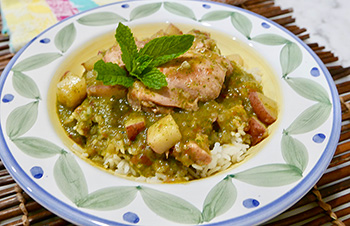 Cook for about 5 to 7 minutes, until the onions begin to turn brown. Stir frequently.

Add the garlic and ginger and cook for about 2 minutes. Stir frequently.

Add the chicken and cook for about 5 minutes until lightly browned. Adjust the heat so that the onions brown but don't burn.

Add the water and reduce the heat to medium.

Crush the cardamom, cloves, and peppercorns in a mortar and pestle or blend in a blender to a powder.

Add the powdered spices to the pan with the garam masala and cinnamon.

Simmer over medium low heat for an hour. Stir occasionally.

Remove 1/2 cup of the sauce to a blender. Add the cilantro and mint and puree until smooth. Set aside.

Simmer for another 30 minutes until the potatoes are tender.

Add the cilantro and mint mixture. Stir well and serve over Brown Rice.