Gluten Sensitivity
This recipe is safe for those who are sensitive to gluten. Use garbanzo flour instead of all-purpose white flour and gluten-free pasta in this dish. Lea & Perrins Worcestershire sauce, as sold in the United States, is gluten-free.

"Presenting a rational argument to a person who has forsaken the use of reason is like asking a vegetarian to eat a cheeseburger."
-Michel Templets

The idea that eating healthy is more expensive is a myth.

This Bacon Cheeseburger Mac is similar to a (disgusting) Hamburger Helper (yes, disgusting) that you should never purchase. That Hamburger Helper is $1.99, the pound of beef that it calls for is $5.99. For that you get the true equivalent of 2 servings at $3.99 per serving.

The comparison of calories, fat, sodium and fiber is stunning:

I don't believe the word "stunning" is over the top given that the Hamburger Helper has over three times the sodium (without the bacon) and essentially no fiber or vegetables.

The time to cook the fresh version is about 5 minutes more than the fake version because the whole wheat pasta takes longer to cook. 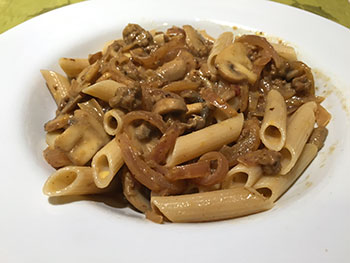 Place the 4 quarts of water in a pan over high heat. When the water boils, add the pasta.

Add the sliced onions and continue cooking, stirring frequently, for another 3-4 minutes or until the onions are slightly softened.

Add the ground beef and saute until browned.

Sprinkle the flour over the mushroom and beef mixture and stir until well blended.

Reduce the heat to low and simmer, uncovered, for about ten minutes. Stir occasionally.

When the pasta is done, drain the pasta. Turn off the heat beneath the mushroom/beef mixture and add the pasta to the pan.

Add the cheese and stir until the cheese is melted and the mixture is well blended, then serve immediately.