Gluten Sensitivity
This recipe is safe for those who are sensitive to gluten. Use gluten-free garbanzo flour in this dish.

"The only thing that will make a souffle fall is if it knows you're afraid of it." -James Beard

Spinach souffle was one of those dishes that was served in fancy restaurants when I was a kid. I was just learning about food and watching the chefs whisk the egg whites and gently fold the creamy spinach mixture seemed at once improbable and requiring vast skills.

Making a souffle is neither improbable or requires much skill: it's easier than most people think.

This spinach souffle takes only a few minutes to prepare and makes a fantastic dish for your next weekend brunch or dinner party. The spinach sauce can be made ahead and added to the whisked egg whites when ready to bake. Allow the chilled mixture to come to room temperature before adding the egg whites.

Souffles do fall, but that is usually when there is too many egg whites for the amount of sauce. It is a fine balance, and if you don't have vast skills, following a souffle recipe will likely help you get it right every time.

This recipe can easily be multiplied by using multiple small souffle dishes or 1 or more larger ones.  If you are making a single large souffle, do not multiply by more than 4.

This recipe makes good leftovers (but will not be as fluffy). 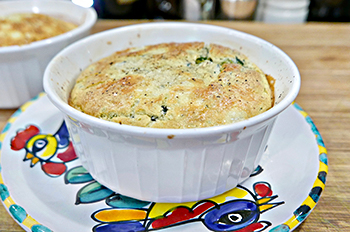 Coat a souffle dish (or dishes) with the butter and set aside.

Place the olive oil in a medium sauce pan over medium high heat.

Add the spinach and cook for about 4 minutes, until the spinach is wilted and most of the water has evaporated.

Add the flour, nutmeg, and salt.

Cook for about one minute until the flour is well incorporated.

Add the milk and cook for about 3 minutes until the sauce begins to thicken.

Use a regular spoon and add about 3 spoons of the spinach sauce to the egg yolks and mix well.

Return the egg yolk mixture to the sauce pan with the spinach, along with the parmesan cheese.

Fold together until the cheese is melted, the mixture is well blended, and the sauce is thick.

Remove from the heat.

Gently fold the spinach mixture into the egg whites.

Place the mixture in the souffle dishes and place the souffles in the oven.

Bake for 20 minutes and serve immediately.