"But the kitchen will not come into its own again until it ceases to be a status symbol and becomes again a workshop. It may be pastel. It may be ginghamed as to curtains and shining with copper like a picture in a woman's magazine. But you and I will know it chiefly by its fragrances and its clutter. At the back of the stove will sit a soup kettle, gently bubbling, one into which every day are popped leftover bones and vegetables to make stock for sauces or soup for the family. Carrots and leeks will sprawl on counters, greens in a basket. There will be something sweet-smelling twirling in a bowl and something savory baking in the oven. Cabinet doors will gape ajar and colored surfaces are likely to be littered with salt and pepper and flour and herbs and cheesecloth and pot holders and long-handled forks. It won't be neat. It won't even look efficient. but when you enter it you will feel the pulse of life throbbing from every corner. The heart of the home will have begun once again to beat." -Phyllis McGinley

I like to leave some chunks in my mashed potatoes. If you like them smooth, be careful because over mashing will result in pasty potatoes. One great solution is to use a potato ricer, but that means you won't get the skin of your potatoes in your dish. I prefer the skin but you may not.

This recipe can be divisible by 2. 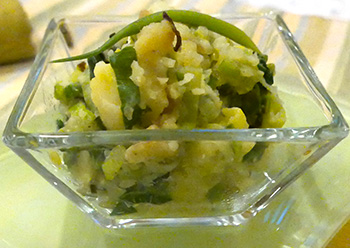 Place the water in a large stock pot over high heat.

Quarter the potatoes and add to the stock pot.

Cover with water by about an inch. Bring to boil and then reduce heat until the water is simmering.

While the potatoes are cooking, place the olive oil in a medium skillet over medium high heat.

Add the green part of the leeks and cook for about 5 minutes. Toss occasionally.

Cook over medium high to high heat for about 5 to 10 minutes, tossing occasionally, until the leeks are lightly browned.

Remove the leeks from the heat and place in a large bowl.

The potatoes should cook about 20 to 25 minutes until slightly soft in the middle. They should give when squeezed.

Remove from heat and drain water.

Add the potatoes to the bowl with the leeks along with the butter, buttermilk, milk, and salt.

Mash potatoes until creamy and gently fold together with the leeks.