Almost every culture uses eggplant, most notably the Chinese, the Italians and the French, but one of my favorite eggplant recipes is this Spanish Escalivada. The mixture of roasted eggplant along with the peppers, onions, and tomatoes is fantastic. The mint really makes the dish shine.

This is where you want to use the best quality olive oil for finishing the dish. For roasting your onions and tomatoes any good olive oil will do, but adding a rich, flowery extra virgin olive oil at the end is the perfect complement to the roasted veggies.

Cooking time: 75 minutes (does not include chilling time)

This recipe can easily be multiplied and will keep well for 2-3 days in the refrigerator. 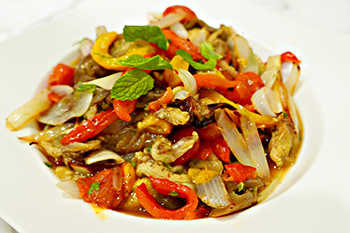 Place a large skillet on the lower rack of the oven and preheat to 400°F.

When the oven is hot, place the eggplant, red bell pepper, and yellow bell pepper on a piece of aluminum foil on the upper rack in the oven.

Place 1 teaspoon of olive oil in the skillet and add the onions.

Return the pan to the oven and roast the onions 15 minutes, shaking occasionally.

Remove the onions and place in a large mixing bowl.

After removing the onions from the skillet, place 1 teaspoon of olive oil in the pan and add the tomatoes.

Return the pan to the oven and roast the tomatoes for 10 minutes, shaking occasionally.

Roast the peppers for 30 minutes, turning occasionally, then place them in individual paper bags with the tops folded closed to cool.

Roast the eggplant for 60 minutes, then place in a paper bag with the top folded closed to cool.

Slice the peppers lengthwise into strips and place them in the bowl with the onions.

Place the eggplant in the bowl with the peppers and onions.

Add the mint, salt, pepper, and lemon juice to the bowl.

Fold together gently and chill well before serving.