"It may be hard for an egg to turn into a bird: it would be a jolly sight harder for it to learn to fly while remaining an egg. We are like eggs at present. And you cannot go on indefinitely being just an ordinary, decent egg. We must be hatched or go bad." -C.S. Lewis, Novelist

This is a very typical Spanish tortilla. While Americans might think of this for breakfast, and it makes a great one, tortillas are more often eaten for lunch or later in the afternoon. In Spain you will even find thinly sliced tortilla on baguettes as sandwiches (these are known as bocadillos).

It is best to cook the potatoes until they are soft but not too soft. They should be a little bit firm since they will be cooked again for about an hour in the oven.

This recipe keeps well, refrigerated, up to 48 hours and can be served cold or hot. It can easily be multiplied but you must use separate pans for each pie. 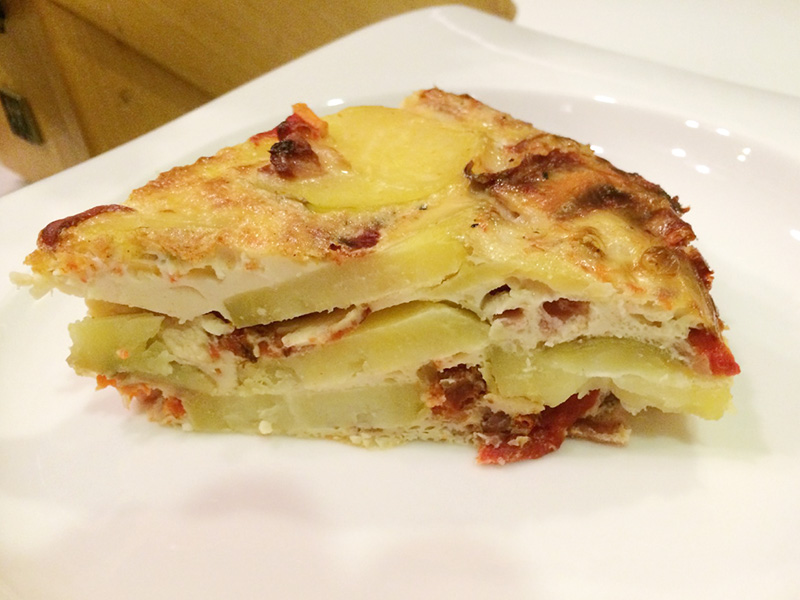 Place the water in a large stock pot over high heat.

Place the potatoes in the water and cook for about 45 minutes until a knife slips into the flesh with easily but with slight resistance.

Remove the potatoes and chill.

While the potatoes are cooking preheat the oven to broil.

Place a sheet of aluminum foil on the oven rack and put the peppers on top.

Roast until blackened turning to cook on all sides.

Remove and place in a paper bag to cool.

When the potatoes are cool, cut them in half and then cut the halves into 1/4 inch sliices.

Place the eggs, milk, salt and pepper in a large mixing bowl.

Add the ham and bell peppers to the egg mixture and whisk.

Place a single layer of potatoes in the bottom of the Pyrex dish.

Pour in half of the egg mixture.

Place another layer of potato slices.

Pour in the remaining egg mixture and then top with the final layer of potato slices.

Lightly pat the slices down so that the top layer is slightly submerged.

Place the tortilla in the oven and bake for 50 to 60 minutes.