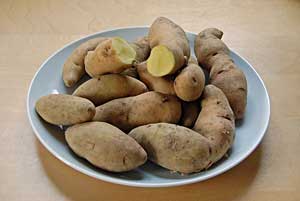 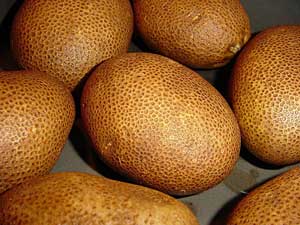 Round Red Potatoes, Round White Potatoes and Purple Potatoes 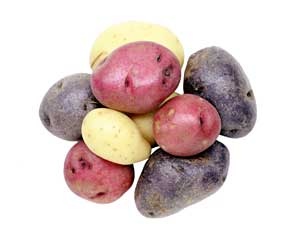 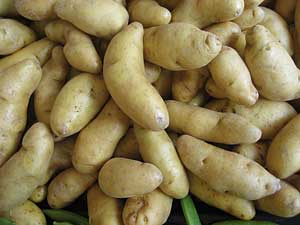 Every week I at least one patient say, "Doc, I'm going to lose weight because I have quit eating potatoes." This is the unfortunate legacy of Dr. Atkins, and what a shame that he left people with the perception that potatoes are bad for them or cause weight gain. Potatoes are pretty terrific and make a fine side dish. They are full of great vitamins and minerals, including Vitamin C, potassium and iron. A 6 ounce serving contains six grams of fiber.

The way that potatoes are cooked is what contributes to weight gain, and there has been pretty good research on this. French fries, potato chips and other highly processed snack foods appear to be the culprit - and not the lovely potato. Potatoes do not make you fat.

There are four basic types of potatoes - long white, russet, round red and round white. The first two of these are similar and contain higher amounts of starch, with a lower moisture content. The russet potato is rounder and has a brownish skin with a lot of eyes. In contrast, the long white is longer (hence the name) and has a thin, grayer skin.

Because of the lower moisture content, these are great potatoes for baking. There are small, long white potatoes about the size of a finger, appropriately named fingerling potatoes. These are one of my favorites for roasting. The combination of higher starch content and lower moisture russets and long whites make them perfect for lighter, fluffier French Fries.

Round potatoes include the round white and the round red (sometimes called new potatoes). They are also called boiling potatoes and have a higher moisture content and a waxy texture. They are great for boiling or steaming but I like these best for roasting. I believe that round potatoes make the best mashed potatoes. Yukon Golds are a variety of round red and make the perfect mashed potatoes, having a richer flavor than their cousins.

Sweet potatoes are not yams although they are often labeled yams. What is marketed in the U.S. as a sweet potato is usually a potato with a pale skin and creamy yellow flesh. These are closely related to russet potatoes and are drier and not very sweet. These are not as easy to find as what are marketed as yams.

There can be some confusion because what is usually sold as a yam in the U.S. is actually darker skinned sweet potato. They range widely in color from light yellow to dark red-orange. You can use them in almost any recipe that calls for potatoes. In cooking them the rule of thumb is that the starch content and moisture fall between the waxy potatoes like Yukon Gold and russets like Idaho potatoes. As such, they are really versatile and work great as a simple baked potato, mashed, as home fries or thick cut French fries. In most Dr. Gourmet recipes I use a darker garnet yam when possible. They have a rich creamy texture but will hold up when making almost any recipe.

Skin on, skin off, boiled, steamed, mashed, whipped, blended, riced, forked, what have you—all of these are, simply put, your own preference. I like the skin on and a little bit of chunkiness but you may like them perfectly smooth.

The skin on, skin off issue is easy. Either you like potato skins or you don't. You can peel the skins prior to cooking, however, when you steam or boil the potatoes, the skins of round potatoes, such as Yukon Golds or red potatoes, will usually just slip off.

I prefer to use a fork when mashing just a few servings, but for any quantity a potato masher makes short work of the task. There are two types of masher. The wire potato masher has a serpentine wire head attached to a handle.

Wire mashers will result in chunkier mashed potatoes, so if you like them smoother, use a disc masher. The small holes in the round head let the potatoes squeeze through. Disc mashers don't work very well for potatoes with their skins still on them

For finely mashed potatoes use a potato ricer. Potato ricers are like big garlic presses (or maybe it's that garlic presses are like small potato ricers). There is a chamber usually large enough to hold one or two boiled potatoes and using levering action the attached plunger squeezes the potato through small holes in the bottom of the chamber. It is called a ricer because the potatoes that are forced through resembles rice.

Most potato ricers have interchangeable plates with different size holes. If yours does, make sure that you disassemble and clean them as soon after use as possible. Dried potato starch is much like glue and getting it apart later will be difficult. The ricer that my mom had when I was growing up was made from cast aluminum but you can find chromed steel or stainless steel on the market as well. I have one that is made of plastic that I especially like. It came with three discs.

I think that the best potatoes for pizza toppings are the round potatoes. They are waxy enough after being cooked to hold together well and still have a great potato flavor.

The same holds true for potato salads and choosing a waxy potato like red potatoes or Yukon Golds will work best. After cooking they are not as flakey and hold together better.

Many recipes for French Fries (as well as other potato recipes) recommend soaking the potatoes in cold water for thirty minutes. The rationale is that some of the starch is leached away and helps the texture of the potato, but this simply doesn't make any sense. The starch on the outside edges of the cut potatoes may wash away, but significant starch or nutrients are not likely to be changed. There may be some slight change in the moisture content of the potato, however.

It is more likely that the inside of the chilled potato takes longer to cook. Consequently, the outside will be crispy and the inside soft and moist. My French Fries recipe was tested both ways (with and without soaking the cut potatoes in ice water) and the soaked potatoes were lighter and fluffier on the inside and crispier on the outside.

I like to steam small red or Yukon gold potatoes for potato salad. Leaving the potatoes whole keeps them from absorbing more water than I would like and by cooking them in a large steamer they stay moist but I can easily poke them with a fork to test for doneness. It is also safer when draining the potatoes.

Potatoes as a Thickening Agent

Thickening sauces and soups can be accomplished by a variety of ingredients but most rely on a starch. Even though starches such as flour and potatoes are mostly carbohydrate, they also have proteins that, when heated, interact with liquid to thicken them. Most cream soups begin with a roux and milk, but with some soups, like chowders, it is primarily the potatoes that act as the thickening agent.

In this case I prefer russets or long whites because of the higher starch content. These potatoes also don't hold together as well when heated and as they breakdown make a thicker soup.