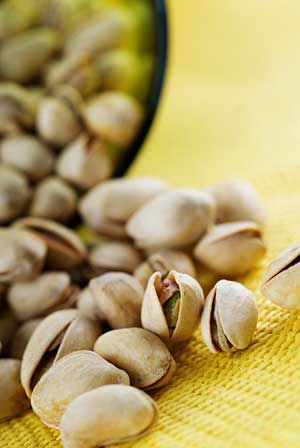 Pistachios are my favorite nuts. Most people think of them as a snack, and they are a great choice for something to nibble on, not just because they are delicious but they are also really good for you.

Pistachios are drupes and are in the same family as peaches and nectarines, so they are actually a stone fruit. As such, they are also related to mangoes and cashews. Like other stone fruits, they grow on short bush-like trees in hot climates. Most of the pistachios sold in America today are grown in California from the Kermen (female) and Peters (male) varieties. The flesh of the seed is green, with a slightly purplish skin when fully ripe. There are a wide variety of pistachios but these other varieties are rarely found in the U.S..

An ounce of pistachios comes in at 159 calories. There's 13 grams of fat, but most of it is monounsaturated fat at 7 grams per ounce, with only 2 grams of saturated fat. There's a fair amount of fiber at 3 grams, making these little guys the perfect snack. They are full of great antioxidants, including beta carotene and Vitamin E. They have a fair amount of other vitamins and minerals as well.

While they do have a lot of calories, in one study those subjects who substituted 20% of their calories with pistachios neither gained nor lost weight. They did, however, have improvement in their cholesterol profile: their total cholesterol went down, their HDL levels (the good stuff) moved up by about 25%, and their LDL levels (the bad stuff) were reduced as well. (Nutr Met & Card Dis. 2006;16:202-209)

There has been research that shows that snacking on pistachios in the shell does slow us down as compared to eating shelled nuts. Interestingly, another article showed that if we see the shells stack up we'll eat fewer calories: about 13% fewer. (Appetite 2011;57:418-420)

This is one of the nuts (seeds actually) that you should keep on hand both for snacking and for recipes.

Visual Cues and Portion Control
In a study funded by pistachio growers, researchers at Eastern Illinois University theorized that seeing the proof of one's previous consumption (in the form of chicken bones, crab shells, multiple drink cups or food wrappers) might make people more aware of how much they had already eaten - leading to less intake overall.

Pistachio Nuts Improve Cholesterol
Turkey is a Mediterranean country, and as such The Mediterranean Diet is common there. Researchers in Turkey noted that pistachio nuts are popular in areas from western Asia to Afghanistan and beyond, so they chose to focus their research on nut consumption and cholesterol on pistachios.