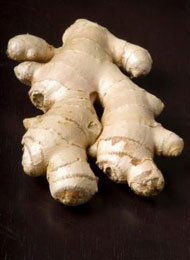 I have a good friend who is of Korean descent, and he doesn’t like ginger. He doesn’t even like ginger snaps. Now I can’t really imagine this - especially given the prevalence of ginger in Asian cooking - since I love ginger so much. It’s pungent, spicy and a bit sweet all at the same time.

Interestingly, ginger has been studied a great deal for its anti-nausea effects. Much of the research has been done in women with the “morning sickness” associated with pregnancy. While the studies are small, they do show that ginger can be as good as some prescription drugs in treating nausea.

The gnarly looking root comes from a plant grown in subtropical and tropical areas. Most of the ginger in U.S. markets in grown in and imported from Jamaica. Although it is available year ‘round now, higher quality young ginger roots are harvested in the spring and are more readily available in specialty or Asian markets. It has a thin, light tan skin and has a less woody texture than the more common mature ginger root. The trade off is that mature ginger is available in most supermarkets today.

Smooth skin that appears slightly moist is a sign of freshness. The tougher skin of older ginger root must be peeled off completely. Ginger root will only keep for 2 weeks in the fridge, at most, and you can tell it’s not fresh when the skin begins to wrinkle. It does freeze, but with it being widely available it’s best to just buy a small amount. Don’t hesitate to break off a piece that is just the size you need for a particular recipe.

Ginger is a good example of the difference between a fresh spice and dried one. Ground ginger doesn’t really taste very much like fresh ginger. In any recipe that calls for ground ginger, try substituting about 2 tablespoons of minced fresh ginger for each teaspoon of ground ginger. The flavor will be more mellow and full bodied. It will be much less spicy than the ground ginger. As with all recipes, neither is ‘right,’ just different.

Keep in mind that ginger - especially fresh ginger - can be spicy and sometimes too much for many folks. If you are uncertain, start low and increase the amount slowly.

Occasionally I will use candied ginger in a recipe. This is just what it sounds like. Small chunks of peeled ginger are cooked in a sugar solution and then dried. They add little in the way of calories to most dishes, but they do add a lot of ginger flavor that’s not as spicy as ground or fresh ginger.