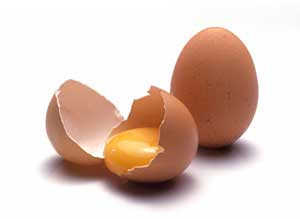 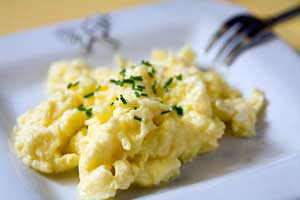 Eggs Are Good for You!

Back in the 1970's and 80's eggs got a really bad rap - and not for very substantial reasons. Much of what happened in the late 1960's that laid the groundwork for the egg's poor reputation wasn't based on sound science, but over the last 30 years research has shown that for most people, dietary eggs and cholesterol is not a problem. The truth is that the amount of trans fat and saturated fat in your diet has much more impact on your cholesterol levels - and therefore your risk of heart disease - than the amount of cholesterol you eat.

We do know that there are folks who are considered "hyper-responders" to cholesterol consumption, meaning they have a greater increase in their blood cholesterol after consuming dietary cholesterol (although not a tremendous increase). About 1/3 of us might be more sensitive (Am J Clin Nutr 1985;42:42 1-431).

Even so, in large studies looking at cholesterol consumption (especially eggs) it doesn't seem to matter all that much.

As far back as 1999 there was strong evidence that eggs were not an issue. Dr. Frank Hu and his colleagues looked at the combined data from two very large studies with over 37,000 participants (JAMA 1999;281(15):1387-1394). Of the 2,626 reported cases of heart disease and stroke, the researchers found no evidence of a link between egg consumption and cardiovascular disease. There conclusion stated, "These findings suggest that consumption of up to 1 egg per day is unlikely to have substantial overall impact on the risk of CHD or stroke among healthy men and women." When they looked at diabetics, there was some suggestion that diabetics might be at a higher risk with egg consumption.

There are also reports providing evidence that having eggs as part of a calorie restricted diet resulted in improved weight loss (both regular and low-carb diets). These are small studies but appear effective (Int J Obesity 2008; 32: 1545-1551).

I think that eggs are pretty good for you, but as the old saying goes, too much of a good thing is too much of a good thing. I don't think this means you should eat eggs every day, but at the same time they appear unlikely to do you much harm in moderation (as with most foods). Better to look at the amount of fat and saturated fats in your overall diet than to obsess over how many eggs you eat.

Brown (or other color) Eggs

There is no nutritional difference in an egg with a white shell and one with a brown shell. The breed of hen that lays the egg determines the color. In fact, I have a patient who has black hens that lay green eggs. So I really have had green eggs and ham for breakfast.

Size does matter. For the most part the eggs that you buy in the store come in 3 different sizes: medium, large and extra-large. Most recipes, including the ones on this site, are written using large eggs. Just as important, the nutrition information is based on large eggs and using an extra large egg has about 20% more nutrients (including calories, fat and cholesterol).

With baking or making desserts this is important, because these recipes are basically chemistry and success depends on exact amounts of ingredients. If you are out of large eggs and need to use another size, here's a rule of thumb for substitution: 5 large eggs = 4 extra-large eggs = 6 medium eggs.

There are a number of egg substitute products in the grocery store. They are made mostly with egg whites but contain small amounts of thickener. They're great for cooking scrambled eggs and omelets, and, in some cases, they can be used in baking. The main drawback is that substitute eggs are more expensive than regular eggs.

One quarter of a cup of most substitute egg products is equal to one egg. They usually have no fat and no cholesterol. There is a small amount (1 gram) of carbohydrate. There are 6 grams of protein, which is where most of the 30 calories per serving comes from.

Egg whites are used to add volume to a dish or to help it hold together. When whisking, the proteins in the egg whites bond with each other and form chains that trap air. It is the continued whisking and adding of air that allows the whites to form stiff peaks.

Whisk your egg whites slowly at first. Because of the way the protein is linked, whisking too quickly will incorporate too much air early and the whipped egg whites will have a grainy texture. These will often break down easily and become watery.

When using a mixer (which I usually do for meringues) start on a slow setting and increase the speed gradually.

When a recipe calls for whipped egg whites, separating the whites must be done carefully as you don't want to get anything in them. If there is the least little bit of egg yolk in them they will not form stiff peaks. It is also very important that the bowl be clean and dry or the egg whites will not stiffen. (See also Copper Bowl.)

What Liquid Should I Add to Scrambled Eggs?

There are a lot of different liquids added to omelets and scrambled eggs. I like to add a little water, not because it saves on calories, but because I like how the water steams off as the eggs are cooking. The steam results in a lighter omelet and the water doesn't mask the taste of the eggs.