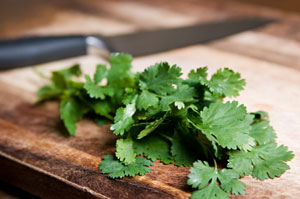 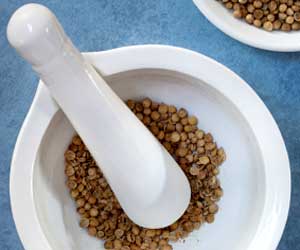 Cilantro is also called Chinese parsley in the US, but is known as coriander in most other English speaking countries. A lot of cuisines use the leaves as well as the seeds (both whole and ground). Fresh cilantro is now as common as parsley in most markets.

I find that the stems have as much flavor as the leaves. I generally use the leaves without stems in a recipe where the cilantro both adds flavor to the dish and is also garnish. I use the stems when a sauce will be pureed, because they will add flavor without affecting the texture.

All fresh herbs will last longer when they are kept moist. If the cilantro is wilted at all, don't buy it. To store fresh cilantro, rinse the leaves well and then trim the bottom of the stems. Place the bunch in a glass or small vase, as you would with flowers, and then place the bouquet in the back of the fridge. Wrapping the rinsed cilantro in a paper towel and placing the bundle in a plastic bag before putting in the refrigerator works as well.