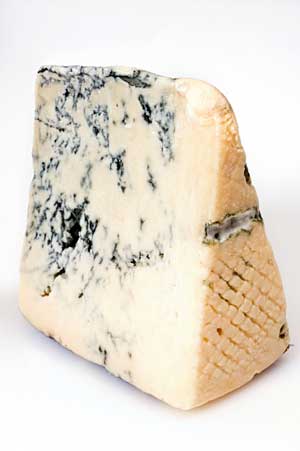 Coumadin® (warfarin)
Blue cheese is safe for Coumadin users with only 1 microgram of Vitamin K.

Sodium
Blue cheese contains a lot of salt and should be used with caution.

GERD / Acid Reflux
With its strong flavor and higher fat content blue cheese might be a GERD trigger for some.

There are myriad varieties of blue cheeses. Most on the market are made from cow's milk, but there are both sheep's and goat's milk versions as well. The blue mold that runs in fine veins through these cheeses is most commonly from the bacteria Penicilllium roqueforti or Penicillium glaucum. The mold grows during ageing and results in fine blue or blue-green veins throughout the cheese.

True Roquefort is made from sheep's milk in the south of France, while Stilton is the most famous English version of blue cheese. The Danish Danablu and Italian Gorgonzola are made in the same fashion. All blue cheeses have subtle differences, and the variations between creameries and countries, as with any cheese, number in the hundreds. The variations range from a drier, crumbly texture such as Stilton to a creamier Gorgonzola. The molds bring different flavors, with some being subtle and others with a strong, sharp taste.

In 1941, Iowa State University developed a process for making blue cheese using pasteurized milk. E.H. Maytag, the son of the American dishwasher manufacturer, began producing a cow's milk cheese and his dairy still produces a fine American version of blue cheese. Maytag still ages their cheese in underground caves in much the same way as with French and European creameries. Maytag blue cheese is generally a milder version than European cheeses, but it still has a creamy, tangy flavor.

Blue cheeses are generally a medium fat cheese, having between 8 and 9 grams of fat per ounce. Some are higher in fat with up to 12 grams per ounce, but as with so many flavorful cheeses, a little can go a long way. As with many cheeses it also contains a fair amount of sodium, so you may not have to add as much salt to recipes that use blue cheese.

There has been controversy over whether blue cheese is gluten free or not. The concern grows out of the fact that the mold spores for blue cheeses were originally grown on breads and other media that contained gluten. For a long time blue cheese was considered off limits for those on a gluten free diet. Excellent research by Dr. Terry Koerner in the early 1990s and funded by the Canadian Celiac Association (PDF) showed that the amount of gluten transferred from the growth media to the cheese was quite small, with levels far below the 20 parts per million generally accepted as safe.

Ask Dr. Gourmet: What can I use in place of Gorgonzola cheese?
Ask Dr. Gourmet: With my cholesterol problem, should I avoid all cheeses?
Ask Dr. Gourmet: Do you have information on tyramine in foods?
The How and Why of Eating Healthy: Are dairy products good for you?
A Healthy Pregnancy: What NOT to eat
Dairy Products in the Mediterranean Diet