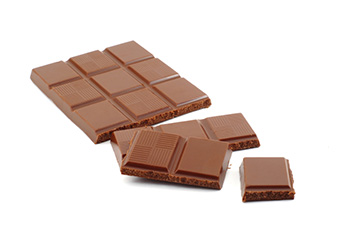 If chocolate liquor is not dried and ground into cocoa powder, it is refined further by replacing some of the cocoa butter with lecithin (and other ingredients depending on the manufacturer) to create a smooth velvety chocolate. This unsweetened chocolate is what we know as baker's chocolate. It is also called bitter chocolate and is the base for most of the chocolate sweets created today.

Good News for Those Who Love Chocolate, Wine or Tea
I've talked before about the positive effects of polyphenols, which are found in fruits like grapes and in tea, red wine, cocoa and coffee. The largest subtype of polyphenols are called flavonoids. There's been some really interesting research linking the intake of flavonoids and a reduced risk of Alzheimer's Disease and dementia in general. On the one hand, it seems that moderate alcohol use may help prevent Alzheimer's, but on the other hand, too much alcohol has long been regarded as one of the causes of dementia.

Chocolate joy, chocolate guilt
A group of researchers were curious about what our emotional responses to chocolate are (Appetite 2006; 46: 332 - 336). They asked 37 women between the ages of 19 and 30 to eat either chocolate, an apple, or nothing twice a day over a 6 day period. The timing of the consumption of each food was determined by instructions contained in sealed envelopes. After eating the instructed food, participants were asked to complete a questionnaire at 5, 30, 60 and 90 minutes.

Yes, chocolate IS different for men and women
The effect of food stimuli and the resulting feeling of satisfaction (or "satiety") in the brain can actually be observed by performing Medical Resonance Imaging (MRI) scans on the brain. While sex differences in eating behavior have been documented, most research on brain activation related to eating has been limited to men only or have lumped men and women together.