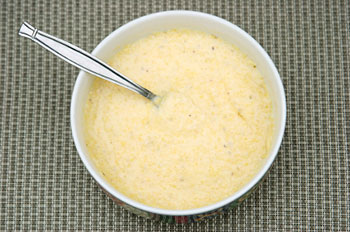 Having just moved back to the South, I have experienced something that I know a lot about but haven't had to talk about with patients in some time. Grits.

Yep, that's right, grits. I grew up with grits and many of you don't really know much about them, let alone eat them. Grits are coarsely ground dried corn. Prior to being dried, the hull and germ of the kernel is removed. The resulting "hominy corn" is often bleached prior to grinding. The larger of the ground kernels becomes grits and the finer is cornmeal (polenta in Italy).

There are three types of grits sold in America today. The first grinding results in a larger grain and these grits take longer to cook. Quick grits are grits that have been pressed into smaller granules and, as the name implies, cook much faster. Instant grits have been precooked and dried. Adding hot water is all it takes to have instant grits. (They taste more like hot water than grits.)

The problem is that there is not much nutritive value in grits. They have about 150 calories in a cup of mostly carbs. Not all that great carbs with almost no fiber. It's not so much that you shouldn't eat grits, but they're not what you want to have every day for breakfast because there are better choices that are much higher in fiber. (I love cheese grits every now and then as much as the next Southerner.) 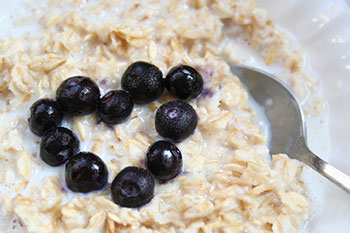 Oatmeal. This is the easiest alternative and most folks like it. When I talk to patients about replacing their grits with oatmeal they say, "Sure, I love oatmeal." The same cup sized serving has about the same 150 calories but at least 4 grams of fiber. It's better to use the "quick" rolled oats than making instant oatmeal, however.

I particularly love Steel Cut Oats. Steel cut oats are just that instead of being rolled the oats are cut with knives. The finished product takes much longer to cook and the finished recipe is much chewier and has a lovely earthy taste.

While oatmeal is a fantastic alternative to grits there are other choices. I have often thought of Cream of Wheat as brown grits. The texture is similar but the flavor much nuttier. Not as much fiber as oatmeal, but still almost 2 grams in a cup.