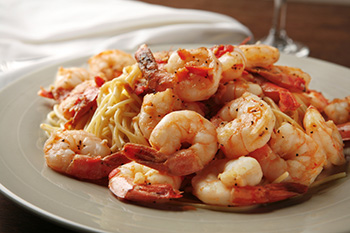 While peanut and egg allergy most often are found in children, shellfish allergy occurs mostly in adult patients. Although 1.9% of adults believe that they are allergic to shellfish, only about 1.3% of adults in the US actually have a physician-diagnosed shellfish allergy. The percentage of people with a shellfish allergy is fairly equal among age and racial or ethnic groups, but African-Americans are more likely to self-report an allergy. People who experience a severe reaction to shellfish may also experience reactions to fin fish as well, but just why that might be is not yet well understood.

The major allergen in shellfish is the actin-binding protein tropomyosin. (Interestingly, parasites often associated with shellfish have also been found to be allergenic.) Crustaceans (shellfish) include crab, shrimp, krill, molluscs, and copepods. molluscs include clams, octopi, squid, and scallops. Copepods are small (1-2mm) crustaceans found in fresh water supplies all over the world and are used in the tap water supply to control mosquitoes and other insects. While the larger copepods are normally filtered out, the smaller ones can make their way into the water mains and are routinely found in the tap water of cities that rely on reservoir water, such as New York and San Francisco.1

Those with shellfish allergies should be aware that beer and wine may be processed with clarification agents derived from fish bladder. Be cautious of them unless you know that either they have not been processed this way or that you are not allergic to fin fish as well as shellfish.

At one time there was a belief that the allergy to shellfish was caused by an allergy to iodine in the shellfish. The good news is that this myth began as a misinterpretation of studies done in the 1970s. We're not sure why shellfish became the focus of these studies, but in truth the results simply showed that 15% patients with any food allergies were also allergic to iodine based contrast.2