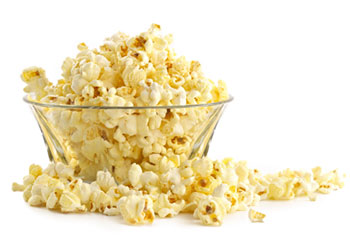 A few weeks back I did a cooking demo, and as part of the presentation we included a discussion of snacks. There are a lot of great snack choices, but near the top of my list is popcorn. Why? Because corn is a whole grain and popcorn is corn.

As part of the demonstration, we threw a 100 calorie popcorn pack in a microwave, set the timer for 90 seconds, and all of the sudden, boom! - there's a snack.

After the talk someone came up and asked about the popcorn that we used and the added oil and chemicals in the commercial varieties available (not to mention that she brought up the GMO issue). Truth is, there are some microwave popcorns out there with oils that aren't all that great, and some of the ingredients in microwave popcorn do look to be pretty dubious. We used a natural popcorn with organic ingredients, but the challenge is always cost - such products are generally up to double the price.

But there's a solution.

You don't need anything but some popcorn and a brown paper bag. That's all. Put two tablespoons of popcorn kernels in a brown paper bag (the size of a lunch bag), fold the top over about two inches and then fold the fold in half. Fold the corners of the bag diagonally to seal the bag, put it in a microwave and set the timer for two minutes.

That's it. It's plain popcorn, however, and you want to have a little flavor, melt a teaspoon of butter in the microwave for about 30 seconds, drizzle it over the top along with 1/8 teaspoon of salt, and you have a fantastic snack. Inexpensive, natural, not a lot of added calories or fats, and the good thing is that buying plain popcorn kernels is far cheaper than buying the microwave popcorn.

Really cheap. Two pounds of popcorn kernels runs about $2.50. That works out to about 7 cents a serving (not including the flavor). By contrast one bag of the 100 calorie microwave popcorn is 53 cents per serving.

With the butter and salt, the brown-bag popcorn has only 128 calories, 5 grams of fat, 249 milligrams of sodium, and 3 grams of fiber. Two tablespoons of raw popcorn makes between 4 and 5 cups of popped corn.

Another great flavor is browned butter: put the teaspoon of butter in a small glass dish alongside the popcorn for the whole two minutes and drizzle that over the popped corn with the salt for a savory, buttery flavor.

Or whisk together a teaspoon of toasted sesame oil with a teaspoon of low sodium soy sauce while the corn is popping. Toss that with the popcorn for a great Asian taste and it's even lower in sodium - only 179 milligrams - although full of great umami flavors.

Almost any flavor will do. Choose a teaspoon of fat - olive oil, grapeseed oil, sesame oil, butter - and a flavor. If the flavor has saltiness already like the soy, that's great, but adding the 1/8 teaspoon of salt along with a big spice like curry powder, Creole seasoning, or chili powder makes for a really satisfying snack.