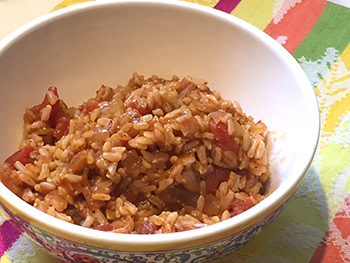 A few weeks ago I wrote about Hamburger Helper. It is hard to overstate how disgusting I think that Hamburger Helper is. Quite simply it has no redeeming value at all - it tastes terrible, contributes to disease, is more expensive than making your own versions and, well, there isn't really anything else. It's just foul.

Digression aside, we thought we might tackle another popular product that can be made better: Rice-A-Roni.

Rice-A-Roni has a long heritage as a rice and pasta dish. Eating it, one finds it difficult to believe that there is really any pasta in the dish - it has the texture of overcooked rice and the white pasta seems superfluous. It turns out more gummy than anything.

The numbers on Rice-A-Roni are particularly terrible. The package says that after being prepared the dish contains a whopping 1,250 milligrams of sodium - over half of what you need for a day. For a side dish! There's not much fat in the box, but after being prepared it does come in at 8 grams with the majority of it being saturated fat as well as 1 gram of trans-fats. All of this for only 260 calories in a 1-cup serving.

Beyond the appallingly poor nutrition facts, the ingredients are just as bad:

When products have monosodium glutamate and trans-fats, simply put them back on the shelf.

The argument is always that these products are easier, cheaper, and take less time than making your own. Like with our analysis of Hamburger Helper, this is simply not true. For this analysis we tested Rice-A-Roni Spanish Rice head-to-head with making your own version.

Yes, Rice-A-Roni out of the box is slightly easier. Place a bit of margarine or butter in the pan, brown the rice, add water, seasonings packet, and tomatoes. That's it - but the difference between the boxed version and making your own is dicing an onion.

Boxed (4 servings at 1 cup per serving)

Making your own takes about the same amount of active cooking time. The package of Rice-A-Roni claims that it takes 20 minutes, but it actually takes right at 25 minutes. Using brown jasmine rice for the fresh version does take a little longer to cook: about 45 minutes or so.

Once again, making your own food instead of cooking fake food out of a box takes about the same amount of time (if you use white rice), is just as easy and costs less. Here's my healthy Rice-A-Roni Style Spanish Rice recipe.