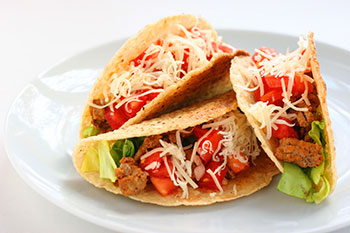 It almost never fails. When I am speaking about food to physicians, or in a talk to the community, people question me about my statement that "tacos are really good for you." I will say the same about pizza, mac & cheese, and spaghetti, but for some reason tacos gets everyone's attention. I have asked people after talks or cooking demos why and no one has an answer. People just don't think of tacos as being healthy.

They are right, of course, and I believe that this is because they equate tacos with places like Taco Bell, which is pretty bad for you. It's a shame because the innocent taco, like so many other great recipes, has been corrupted. Beyond the needless amounts of fat and salt in many of their products, the ingredients themselves are questionable.

Not only has fast food has given tacos a bad rap as being fake food and unhealthy, fast food is not really fast these days and will cost you a lot more money.

We have already dealt with #1 and #2. We know that Taco Bell makes fake food and they have made it unhealthy. But tacos are really great for you when you make your own. Corn tortilla shells are low in fat, use whole grain corn and have very little sodium. The filling can be made using fresh, real ingredients, including lean ground beef, chicken thighs, corn and beans, fish, or even tofu, along with onions, peppers and celery. Top that with fresh tomatoes, lettuce, or salsa, and you have a tasty meal that's fresh and real.

But what about the time? It takes about 5 minutes prep to get your taco filling cooking. Cut a few onions, some peppers, a bit of garlic, toss in some chicken thighs and spices and you can make enough taco filling for a week in all of ten minutes hands-on time. That is the same ten minutes you will stand in line at the fake and not very fast Taco Bell.

And it is cheaper to make your own. If you make a simple taco filling using lean ground beef or boneless, skinless, chicken thighs, it will cost you about $8.00 for 12 tacos. The least expensive taco at Taco Bell is about a dollar.

And what do you get for that money? Fake food.

I made a comment in a column a few weeks ago about the amount of meat that was actually in the "seasoned meat" that Taco Bell serves, referencing articles that reported between 36% meat and the company's claim of 88% (a reader wrote to show me where Taco Bell had justified the latter and that the 36% was hype). I am more than willing to believe the company that it is 88% - but that's just the point. Tacos have gotten a bad rap because Taco Bell admits that they aren't real food. For the record, here's the list of ingredients in their taco meat:

At the risk of sounding like the truly weird "Food Babe," what the heck are wheat and soybeans doing in my taco meat? (She would likely rail on about all the other chemicals too, but that's another column altogether.)

In the end, I want you to take back the taco. Make it your own. Cook taco fillings and keep them on hand for tacos and taco salad and for sandwiches made from the leftovers. They are quick, easy, cheap, tasty and great for you.