Soup to the Rescue 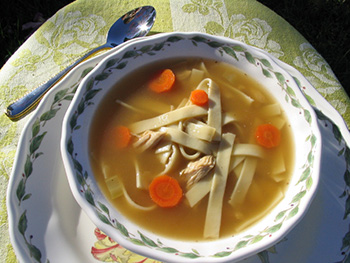 Fall is the time that I most think about soup. Mind you, I love to eat soup year 'round but when it starts turning chilly I want a big bowl of warm comforting soup.

The great thing about soups is that they are generally easy to make and a great place to start if you are new to cooking for yourself. Some onions, vegetables, stock, seasonings, and maybe a bit of meat, simmered for about 45 minutes and you have soup.

It's surprising that there are not more quality research studies about the health benefits of soup. We think of chicken soup as being good for what ails you, so it seems that we might have better research about this.

In a very small study looking at the effect of chicken soup on white blood cells, one group showed a slowing of movement of the cells in test tubes containing broth. In the research, the more soup applied to the white blood cells, the more the movement of the cells slowed. It is certainly a leap of faith to assume that this works in real life, however 1. In a similar study, researchers used Brand's Essence of Chicken and a prepared chicken meat extract and were able to show that these extracts reduced hypertension and heart enlargement in experimental rats. Tests with a prepared pork extract did not show any improvement, however. Again, a leap of faith - but at least we have moved from the test tube to an animal model. 2

These are the sorts of studies we have had, with few looking at longer term outcomes. That is getting a little better in the last few years.

There has been epidemiologic data that shows eating soup is associated with a lower risk of obesity. A group of researchers looked at the National Health and Nutrition Examination Survey (NHANES) data and found soup consumption was associated with a reduced energy density of foods consumed, reduced intake of total fat, and an increased intake of protein, carbohydrate, and dietary fiber. Those eating more soup did have a higher intake of sodium. The researchers felt that the relationship between eating soup and lower body weight might be related to the overall improved diet quality. 3

Researchers at the University of Pennsylvania asked if having a bowl of soup before a meal's entree would help reduce the total calories eaten at that meal. They found that subjects who received soup as a first course ate 20% less of the main course than if they had no soup at all 4. Dr. Rolls and her group at Penn also showed that having two servings of an energy dense soup when on a diet led to 50% greater weight loss than the same number of calories consumed as snack food 4.

It is possible that one mechanism for this effect is that soup can delay gastric emptying. 5

While the research is not great, it does point to soup having some health benefit.

There are great reasons for having your favorite soup based on good old fashioned common sense. The first is that most soups are not calorie dense and are filling and satisfying.

You can make a big pot of chicken and vegetable soup, for instance, and a large bowl will be satisfying, full of fiber, tasty, and great for you. Make a big batch of soup on the weekend so that you have leftovers. During the week the soup will be ready when you don't have the time to make dinner. Lastly, this is a great way to get kids to eat vegetables where they might not eat them as a side dish.

I believe that these maxims apply to stews as well, and the key is choosing a recipe with lean meat, lots of veggies, and whole grains like brown rice, whole wheat pasta, or beans. Here are some examples:

You can also try some prepared soups to keep on hand:

In the end, soup might be healthier for you, but whether it is or not, soup is delicious, simple to make, and cheap.