What Not To Eat: Lunch Edition 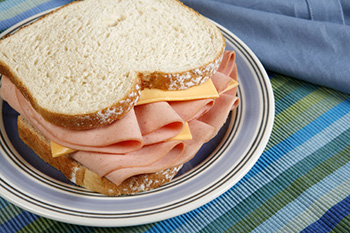 What shouldn't you eat for lunch? Baloney.

It's so easy to beat up on this seemingly innocent little cold cut, but it just has to be done. This is the classic example of what you should not be eating at lunch. That is, you should avoid bologna and while you're at it pretty much all cold cuts. The highly processed luncheon meats that are sold today are, for the most part, poor choices.

"But Dr. Tim," you might say. "A slice of bologna has only 87 calories." That's true, but about 72 of those are from fat and about a third of that innocent little slice is saturated fat. Pair this with a slice of American cheese and a glob of mayonnaise on white bread and you have what is wrong with the Western diet today. That innocent little piece of America comes in at 369 calories, 330 mg sodium and 20 grams of fat. Add a second slice of bologna and you can easily top 450 calories and 1,000 mg of sodium. (By the way, there's only 1 gram of fiber in this sandwich.)

"But Dr. Tim," you say. "That's OK because I don't eat bologna. I 'Eat Fresh' and go to Subway for my sandwiches." Well, that's OK but you do have to be careful there also. The simplest Subway sandwiches are fairly healthy, but that applies to the basic 6 inch sandwich without cheese (which they will happily throw in for free), on their 9-grain wheat bread with lettuce, tomatoes, onions, green peppers and cucumbers. A Turkey Breast sandwich (no cheese) is 280 calories but a whopping 920 mg of sodium. This is their most basic sandwich, but other things that you feel might be good choices simply aren't. The Subway signature 6" BMT sub comes in at 450 calories, 20 grams of fat and a whopping 1,730 mg of sodium.

In short, it's best to be really careful about your choice of cold cuts. That includes those made with turkey. It's fairly often that I have a patient come in and tell me that "it's OK, I'm having turkey bologna." That's better - but not great. Cold cuts are the one package that you have to look at very closely. They will often be high in fat and almost always have way too much salt. But then there's also a lot of other ingredients you don't need. This is one from a popular turkey bologna:

You just don't need all that stuff, and the worst part is that we know that such processed meats are bad for you. Not just a little bad for you, but a lot bad for you. They've been implicated in increased risk of death from colorectal cancer, increased risk of heart disease and diabetes, and faster cellular aging. (And no, putting more vegetables on your sandwich won't outweigh the harm of bologna.)

So what to do? I think that limiting your cold cuts to no more than once a week is a good start. Take leftovers from dinner instead. You'll know that what you are having is better for you. If you do choose a deli sandwich or one from Subway, look carefully at the nutrition facts and choose lunch meats with no nitrites or nitrates.

One great option is to make your lunch sandwich with leftovers. Make a great roast turkey breast on Sunday and use it for your sandwiches during the week. Pot Roast is another good option. Even if you don't have time to make your own, you'll be far better off picking up a rotisserie chicken and carving your own chicken for sandwiches.

Here are some other recipes whose leftovers make great sandwiches: