The Picture of Success 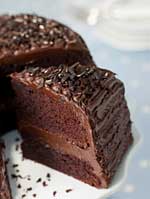 When I was in my twenties I had a friend who was very goal oriented. He had participated in one of those training classes on how to choose, plan and achieve an objective. He carried a picture of a baby grand piano around in his day planner and said that he looked at it all the time. He worked hard and sure enough he had his piano within his target period.

You might think that this would work for eating healthy and weight loss. Carry around a picture of yourself slimmer, maybe? (That is what PhotoShop® is for, isn't it?) I had a friend who sort of did this by putting up pictures of skinny people on her refrigerator. This seems to make sense but what about carrying around a picture of chocolate cake? Can looking at photos of what tempts you to snack actually help you eat healthier? It appears that it can (cool, huh?).

In a study performed at Utrecht University in The Netherlands researchers had female college students look at pictures of chocolate cake or flowers (Appetite 53 (2009) 430-433). The experiment was structured with certain distractions so that the participants wouldn't know that they were being tested for healthy eating attitudes. In the first part of the research they were asked to look through a series of pictures that included the cake and flowers and were then asked if they had a greater intention to stick with their weight loss goals or not. Those who looked at pictures of chocolate cake were more likely to say that they were going to stick to their plans than the ones who looked at only flowers.

It gets better though. In the second part of the experiment the women were offered the choice of a reward for participating in the study. After looking at the pictures they could choose between a healthier wholegrain cookie or a chocolate cookie with no prompting from the researchers (they were simply told to open a box and choose one of the snacks inside). Same result. The participants who looked at pictures of chocolate cake chose the healthier snack while those looking at the flowers snagged the chocolate cookie.

Unfortunately, the researchers did not give the participants a choice with regards to the snack. They were told to "open a box containing a healthy and an unhealthy snack from which they could choose one, ostensibly as a reward for participation." I think that this would have been far more interesting to give them the third option of not choosing a snack.

You've heard me say before that studies like these are not conclusive by themselves and have to be taken in the larger context of eating healthy as well as being extended to more practical real world studies. The authors suggest that further study using real cake and flowers instead of pictures may be one way to confirm these results.

They do speculate that "putting up pictures of food temptations on your fridge may help to keep your weight watching goal in mind." Maybe it's time to make the screen saver on your phone a slice of chocolate cake.