Yes, you can eat red meat (just not every day) 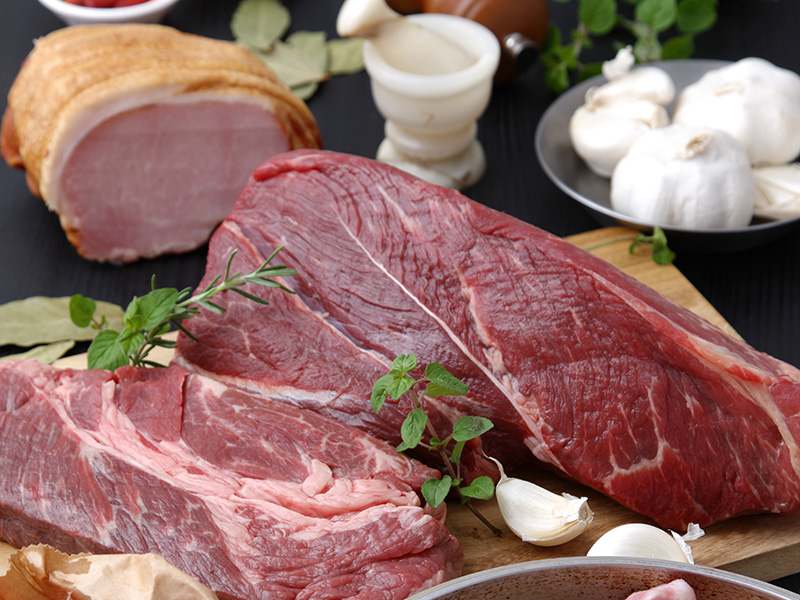 My patients are always saying that they can’t eat healthy because they like to eat red meat. Well, I like eating a good steak as much as the next person and I do. I don’t eat red meat that often – probably about 5 times a month or so. I do eat leaner cuts and Dr. Gourmet recipes reflect these healthier choices.

Most people are concerned about red meat because of the fat and cholesterol and how it can affect their heart. This is important and eating leaner cuts with less saturated fat is key for a healthier cardiovascular system. There’s a role that red meat plays in cancer as well but we haven’t known all that well to what extent until now.

Researchers from the American Cancer Society, Emory University, and the National Cancer Institute recently published a report on the relationship between eating meat and the risk of colon or rectal cancer (JAMA. 2005;293:172-182). While this might not be news to you if you’ve seen other, red-meat-related health reports in the media, the important thing about this study is that it evaluates long-term meat consumption at various levels of consumption as well as focusing on the specific risk of rectal cancer, not just colon cancers and rectal cancers.

This study looked at 69,664 men and 78,946 women between the ages of 50 and 74 who were initially a part of another, larger study on cancer mortality that began in 1982. At that time they filled out a questionnaire with information on diet, exercise, medical history, and other lifestyle habits. In 1992 and 1993 another questionnaire was administered, requesting similar information, and then followed up in 1997 and every two years after until 2003.

In the questionnaires, respondents were asked to report on their eating habits for the previous year, estimating how often, on average, they ate a particular food or beverage per week as well as serving size (small, medium, or large). The researchers defined meats in three basic categories, as follows in the table below. Note that Processed Meat is really a sub-category of Red Meat!

After controlling for various lifestyle factors, including caloric intake, exercise levels, smoking, and the amount of fruits and vegetables consumed, researchers found that those men and women with a long-term high intake of red meat had an increased risk of rectal cancer of 43%.

Those men and women with a long-term high intake of processed meats, however, had only a 20% increase in the risk of rectal cancer, but their risk of other types of colon cancer rose by as much as 50%.

Finally, those who consistently ate the most poultry and fish had a reduced risk of rectal cancer (decreased by 19%), while the risk of other colon cancers were reduced by 23% to 30%.

It’s pretty clear from this study that eating a lot of red and processed meats for the long term isn’t going to do much for your health. That doesn’t mean you can’t eat red meat at all. As the researchers found that those who ate about equal amounts of red meat / processed meats and poultry or fish had no increase in their risk of colon or rectal cancers. That’s good news for those of us who like an occasional steak or good beef stew.