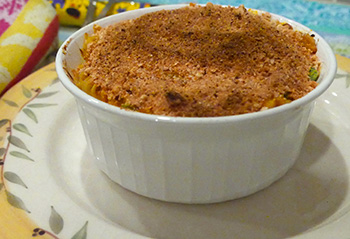 This is another recipe that came from the basket of ingredients my brother gave me for Christmas.

The one real challenge was the canned tuna. Not that I don't like canned tuna: I love it. The can was from Spain and the quality of their canned tuna is excellent. In fact, there has been more than one restaurant in Spain where I have had a great salad with canned tuna combined with sliced tomatoes and onions. Simple is always best, but I felt that to create a recipe for you that is just a tin of tuna (no matter how good) on a plate with some veggies wouldn't be enough.

There was a small tin of saffron paprika in the basket, as well as some panko breadcrumbs. The three of these inspired this casserole. It's a bit extravagant with the saffron, but it came together in these flavors. You can use an inexpensive tuna and it will be every bit as good.

Lastly, the Dynasty panko are some of the best breadcrumbs on the market, and they're quite low in sodium (at only 80 milligrams per 1/4 cup) compared to other gluten free versions on the market.